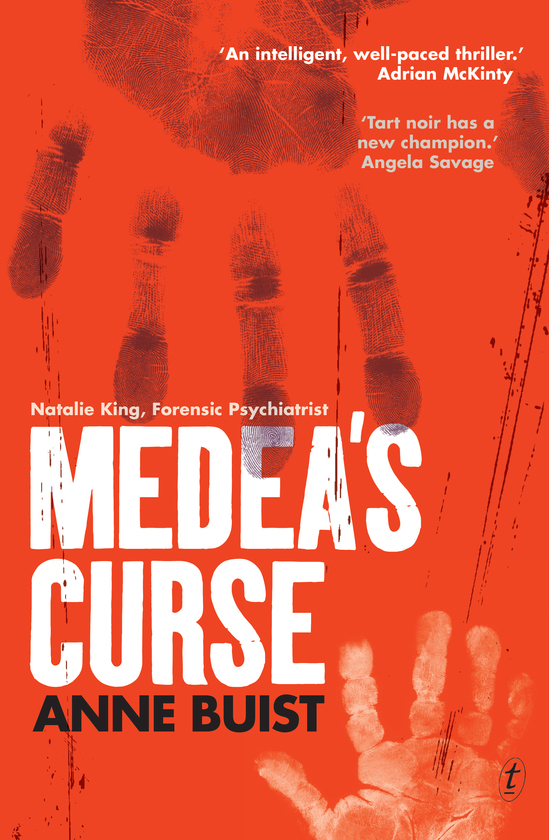 
Forensic psychiatrist Natalie King works with victims and perpetrators of violent crime. Women with a history of abuse, mainly. She rides a Ducati a size too big and wears a tank top a size too small. Likes men but doesn’t want to keep one. And really needs to stay on her medication.

A hostile former patient? Or someone connected with a current case? Georgia Latimer—charged with killing her three children. Travis Hardy—deadbeat father of another murdered child, with a second daughter now missing. Maybe the harrassment has something to do with Crown Prosecutor Liam O’Shea—drop-dead sexy, married and trouble in all kinds of ways.

Natalie doesn’t know. Question is, will she find out before it’s too late?

Anne Buist, herself a leading perinatal psychiatrist, has created an edge-of-the-seat mystery with a hot new heroine—backed up by a lifetime of experience with troubled minds.

At first I found the characters and events of this story hard to get sorted. Natalie King leads a complex and busy life working on cases where mothers have been accused, even convicted, of murdering their children. It is all made more complex by her own bipolarism, supposedly kept under control by medication, if she remembers to take it. What happens when she doesn't is frightening to say the least. Natalie reports regularly to her supervisor Declan who attempts to provide therapy and controls to keep her focussed, but he can only work with what she tells him, or guess at what she is hiding from him.

Things become more complicated though when it appears that at least one of the fathers of the dead or missing children may be connected to a pedophile ring. Most of what Natalie knows is told to her in confidence and she struggles to know what she can pass on to the police without endangering her clients, to say nothing of endangering herself.


Throughout my reading of this novel I could not get out of my head MOTHERS WHO MURDER by Xanthe Mallett, a true crime book that I read last year. MOTHERS WHO MURDER looks at a number of Australian cases where the author feels there has been the possibility of a miscarriage of justice. I feel that this book and MEDEA'S CURSE have the same starting point in the real world, with the latter fictionalising a response from real events.

Anne Buist writes with an authority and confidence that makes the reader sure that these things do happen, even if they rarely surface in my world. This makes for a gritty and noir novel, not for the faint hearted.

Professor Anne Buist is the Chair of Women’s Mental Health at the University of Melbourne and has over 25 years clinical and research experience in perinatal psychiatry. She works with Protective Services and the legal system in cases of abuse,kidnapping, infanticide and murder. Medea’s Curse is her first mainstream psychological thriller.

Gritty or not, Kerrie, it does sound interesting. And mostly, it sounds as though it raises interesting questions, and for me, that gets points.

I think you liked this more than I did Kerrie. I've been feeling quite guilty for having chosen it for book club.

Sounds good, thanks for bringing it to my attention.