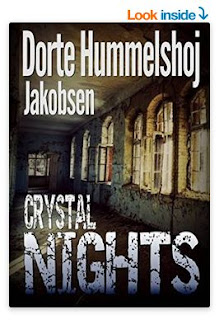 Kristallnacht in Berlin, 1938.
A Jewish family flees from persecution, the mother desperate to assure her children freedom is within their grasp.

Thirty years later, ten-year-old Lars-Ole disappears from a sleepy village in Denmark.
After months of investigation, the police have no leads. Creeping unease thickens when another boy disappears, and Lars-Ole's best friend is determined to act. Will Niels succeed when the police have given up? Or will he pay with his life?

CRYSTAL NIGHTS is the story of the violence and evil that rips through a cosy and peaceful Danish village in the 1960s.
The psychological mystery is Dorte Hummelshoj Jakobsen's third standalone.

I have watched the writing career of Dorte Jakobsen with interest, and I think CRYSTAL NIGHTS is her best yet, demonstrating a maturity of plotting, structure and character creation.

One interesting feature is that the author writes in both Danish (her native tongue) and English. Her fluency in the latter is admirable.

I recently saw the film Woman in Gold and so the events of the persecution of the Jews in Germany just before World War Two were fresh and I think CRYSTAL NIGHTS does an excellent job of showing how those events impacted on the Jews who became refugees. For me to be able to see how it worked out for  Jews who went to Sweden and Denmark was something a little different.

The Danish edition of the book, Krystalnætter, won a national competition in 2013. Judge and editor Lene Dalmejer explains her choice:

”Crystal Nights” is a highly commendable historical suspense novel that captures the reader from the opening phrase. It opens in Berlin in 1938 on the Night of the Broken Glass, and a Jewish family is preparing for a perilous escape to Scandinavia. Subsequently the story moves 30 years ahead to 1967, to the small town Kalum in Northern Jutland.
... and soon tales of destiny emerge, much larger than tiny Kalum. The novel is well-turned, and the plot is spot-on. Dorte Hummelshøj Jakobsen writes in a fashion that almost makes you forget you are reading. This is in itself a huge achievement. The language breathes freely, and we delve into the Denmark of the 1960s without any discord whatsoever. It is, in short, a first-rate novel!

So glad you enjoyed this one, Kerrie