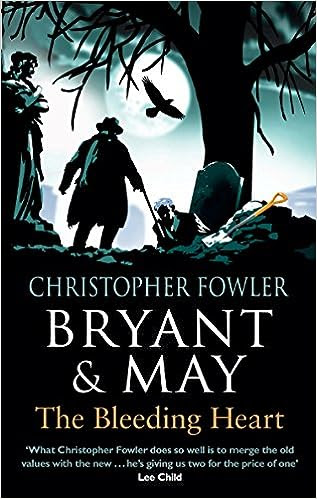 Their first case involves two teenagers who see a dead man rising from his grave in a London park. And if that's not alarming enough, one of them is killed in a hit and run accident. Stranger still, in the moments between when he was last seen alive and found dead on the pavement, someone has changed his shirt...
Much to his frustration, Arthur Bryant is not allowed to investigate. Instead, he has been tasked with finding out how someone could have stolen the ravens from the Tower of London. All seven birds have vanished from one of the most secure fortresses in the city. And, as the legend has it, when the ravens leave, the nation falls…

Soon it seems death is all around and Bryant and May must confront a group of latter-day bodysnatchers, explore an eerie funeral parlour and unearth the gruesome legend of Bleeding Heart Yard. More graves are desecrated, further deaths occur, and the symbol of the Bleeding Heart seems to turn up everywhere - it’s even discovered hidden in the PCU’s offices. And when Bryant is blindfolded and taken to the headquarters of a secret society, he realises that this case is more complex than even he had imagined, and that everyone is hiding something. The Grim Reaper walks abroad and seems to be stalking him, playing on his fears of premature burial.

Rich in strange characters and steeped in London’s true history, this is Bryant & May’s most peculiar and disturbing case of all.

Once again Christopher Fowler delivers! Littered with quirky facts about London, this was again a delightful read. As always the PCU is under threat, this time mainly because their methods don't conform with those of 'modern' policing.

The novel was a "back number" for me, #11 in the series. The crimes are peculiar: a corpse apparently rising from its coffin despite being buried two days earlier, a young man of promise is killed in a hit and run, and someone has stolen the ravens from the  Tower of London.

Excellent characterization and fascinating threads to the story.

Kerrie this sounds great! I adore the cover. Too bad I missed it on netgalley.