Review: THE NATURE OF THE BEAST, Louise Penny 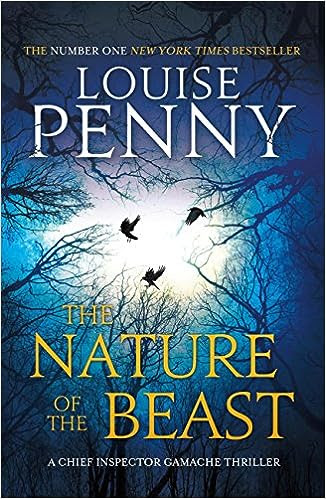 Hardly a day goes by when nine-year-old Laurent Lepage doesn't cry wolf. His boundless sense of adventure and vivid imagination mean he has a tendency to concoct stories so extraordinary and so far-fetched that no one can possibly believe him.

But when Laurent disappears, former Chief Inspector Armand Gamache is faced with the possibility that one of his tall tales might have been true.

So begins a frantic search for the boy and the truth. And what Gamache uncovers deep in the forest leads back to crimes of the past, betrayal and murder, with more sinister consequences than anyone could have possibly imagined . . .

Armand Gamache has recently retired from the Surete but he is yet to decide whether he is satisfied with the tranquility of Three Pines Village. When the offer comes for his return as Superintendent he is tempted. And then he meets two new agents, recruited when corruption was the name of the game, who have no respect for him.

Laurent Lepage discovers something very nasty in the woods quite close to the village but as usual goes over the top in the way he describes it. Nobody, even Armand Gamache, believes him, and no one goes to look at his discovery. Nobody that is except the person who has been looking for this object for thirty years.

For Gamache it brings back the time when a serial killer who was pure evil was tried and sentenced to life imprisonment. But he recognizes that hand here. How can that be?

And how could this object have been built in the woods without others knowing? Who amongst his neighbours knew about it? Who can he trust?


Some interesting features to this story. The investigation into Laurent's disappearance is led by Isabel Lacoste, Gamache's protege and successor, and he really has no official role, but continues to call in favors and controls the play. He also uses his wife's considerable research skills. There is also the fact that there is historical truth to the story about the object in the woods.

I had heard a lot about this novel, all favorable, and I am happy to report those reviewers were right. This is another one that just sweeps the reader along.

Kerrie: Thanks for the review. It is my least favourite in the series.