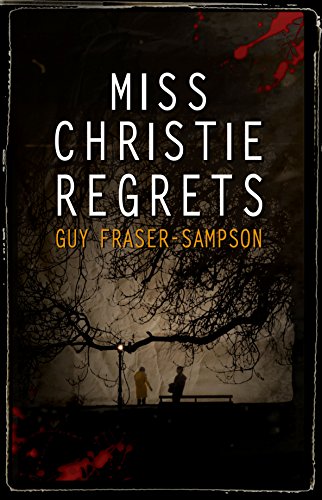 The second in the Hampstead Murders series opens with a sudden death at an iconic local venue, which some of the team believe may be connected with an unsolved murder featuring Cold War betrayals worthy of George Smiley. It soon emerges that none other than Agatha Christie herself may be the key witness who is able to provide the missing link.

As with its bestselling predecessor, Death in Profile, the book develops the lives and loves of the team at 'Hampstead Nick'. While the next phase of a complicated love triangle plays itself out, the protagonists, struggling to crack not one but two apparently insoluble murders, face issues of national security in working alongside Special Branch.

On one level a classic whodunit, this quirky and intelligent read harks back not only to the world of Agatha Christie, but also to the Cold War thrillers of John Le Carre, making it a worthy successor to Death in Profile which was dubbed 'a love letter to the detective novel'.

I was attracted to reading this book by the connection in the title to Agatha Christie. I generally don't read what I term "coat-tails" novels (those that attract readers because of their connection to someone famous) but the blurb for this one made me curious, even though it too tries to attract by making reference to books that have nothing to do with the plot of this one.

The story opens at Burgh House in Hampstead where a young couple are inspecting a Constable exhibition. They are about to have afternoon tea when a uniformed policeman arrives with the news that a murder has been discovered in a room on one of the upper floors. The young woman, who is Detective Sergeant Karen Willis, takes charge until another detective arrives. The detective who arrives is DI Bob Metcalfe, a colleague and close friend.

The plot becomes complicated when a murder is discovered in an apartment house in which both Agatha Christie and the grandfather of the current victim were residents. However the body in this case is long dead, bricked up in the basement in a trunk. The date of the death appears to be some time in 1937.

There seems to be a lot of complication in this novel. On the surface it is a police procedural, but it is also obviously a tribute to crime fiction writers, with the connection to Agatha Christie, but also one character who thinks he is the embodiment of Lord Peter Wimsey, and references to other writers such as Ngaio Marsh and Philip Marlowe. The personal relationships between the main characters are very convoluted. There are political overtones with connections to top secret documents which means that the SIO has to sign the Official Secrets Act.

Then finally there was a twist in the tale that I didn't see coming.

About the author
GUY FRASER-SAMPSON is an established writer, previously best known for his 'Mapp and Lucia' novels, which have been featured on BBC Radio 4 and optioned by BBC television. His debut work of detective fiction, Death in Profile, the first in the Hampstead Murders series has drawn high praise from fellow crime writers as well as from readers on both sides of the Atlantic.