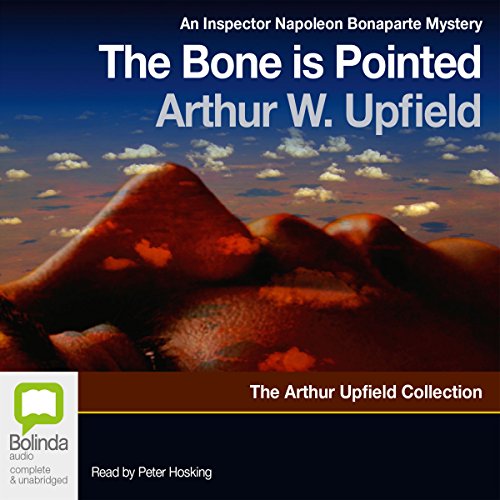 
Arthur Upfield's The Bone is Pointed follows Inspector Bonaparte who solves mysteries in the Australian outback. Published in the 1940's, this story not only offers up a good mystery but also a portrait of the aborigines and Australia in the early 20th century. Peter Hosking tackles this story with verve. He speaks with a clear Australian accent while developing the characters believably, giving each his own attributes. Meanwhile, his varied pacing makes the story easy to follow. Mystery lovers and history buffs alike will have fun with the Inspector Bonaparte Mysteries.
Jack Anderson was a big man with a foul temper, a sadist and a drunk. Five months after his horse appeared riderless, no trace of the man has surfaced and no one seems to care. But Bony is determined to follow the cold trail and smoke out some answers.

In this tale Bony appears as a Queensland C.I.B. detective on leave, turning up at an outback station where a rouseabout has gone missing during a storm. His horse turns up at the station the morning after the storm riderless and there is no trace of Jack Anderson. No black trackers are available because the whole local tribe has gone to visit a female elder thought to be dying. By the time a tracker can be found heavy rains have obliterated Anderson's tracks.

During the story Bony becomes ill with the "Barcoo sickness" but station owner is convinced that the bones has been pointed at him. At first Bony is determined that he will not succumb but he becomes weaker and weaker despite the attempts of the local policeman to help him.

Bony is also proud of his reputation that no case that he has tackled has ever gone unsolved, but that is because he stays on the case until the very end, despite telegrams from his superiors that he must return to the city immediately.

What impressed me was the detailed observations of Aboriginal culture and customs that the author must have recorded. He also presents both sides of the argument with regard to preserving aboriginal heritage. One station family in particular recognise the damage that contact with white people has done to the aborigines, but at the same time are a bit patronising in the way they deal with the aborigines on their station. The character who has disappeared has mistreated aboriginal stockmen, whipping one almost to death, and so is very unpopular. No-one can work out why "Old Lacey" the station owner has kept him on.

There is more than one mystery in this book, and it is good reading, despite the warning from the publisher that Arthur Upfield reflects attitudes of his time, not necessarily views we would share today.