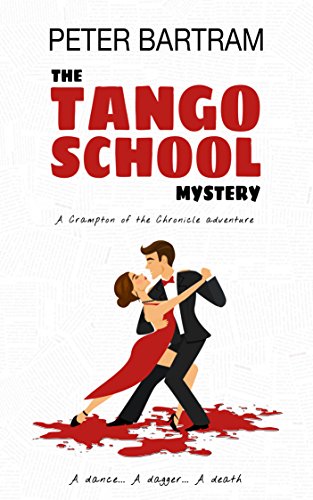 Synopsis (supplied by the author)

Take your partners, please, for The Tango School Mystery. Yes, wisecracking crime reporter Colin Crampton and his feisty girlfriend Shirley Goldsmith tango into trouble in their most thrilling adventure yet.

If you've read the Crampton of the Chronicle series from the beginning, you'll know that the first - Headline Murder - was set in August 1962. Now we've moved on to September 1964 and in the UK, change is in the air. The Prime Minister has just called a general election. Colin is annoyed because he thinks all the political news will push his crime stories off the front page of the Brighton Evening Chronicle.

But that's before he stumbles across a dead body - and encounters a sinister figure from the past. And that's not all. Gerald Pope, the Chronicle's editor - known to Colin as His Holiness - has given him a very special assignment. If Colin gets it wrong, someone else could end up very dead - and Colin will be out of the job he loves. What makes it all worse is that Frank Figgis, Colin's news editor, is trying to give up smoking so he's even more grumpy than usual. Swinging Sixties Brighton comes alive in this new full-length murder mystery that will keep you turning the pages right through the Easter holiday.

The Tango School Mystery is available as a Kindle book or paperback (264 pages).

The plot of this novel takes Brighton crime reporter Colin Crampton into one of his most dangerous investigations so far. He and his girl friend Shirley are dining out when the ceiling begins to rain drops of blood. Colin enters the flat over the restaurant, finds a body, and sees someone leaving.

He already has a case in hand - looking for his editor's brother who is supposedly bent on murdering an elderly fascist who has recently returned to Britain and is standing in the just-announced General Election. Colin is worried that this body means that Gervase, the editor's brother has been successful.

And then a third case comes up - the theft of four life size waxwork figures from the local Tussaud's.
And how is Colin's landlady's experience at her tango dancing lessons connected to any or all of these things?

An amusing cozy, with some reflections on political happenings in Britain in 1964.