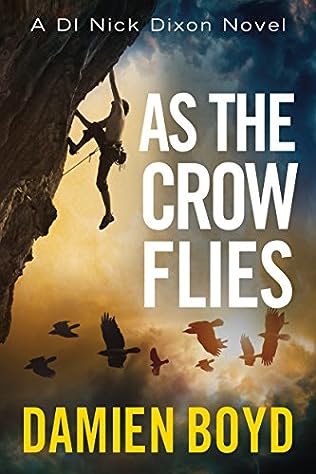 The more Dixon learns about Jake's life, the more he realises that Jake hadn't been quite the man he remembered...and a lot of people could have wanted him dead. Once Dixon gets too close to the truth, those people will emerge from the shadows and kill to protect their secrets.

As the body count rises, Dixon bends the rules to breaking point to lure out a killer and unravel a conspiracy of silence that will rock the sleepy town of Burnham-on-Sea to its core.

As the Crow Flies is the electrifying first novel in the DI Nick Dixon Crime Series.

In the Prologue we are there when Jake Fayter falls from the Crow climb at Cheddar Gorge. The fall is so uncharacteristic of Jake who is Nick Dixon's former climbing partner that Jake's father John contacts Nick to ensure that the police carry out an investigation into whether this really was an accident.

The book nearly lost me right at the very beginning: the details about climbing felt so very technical that I wondered whether I would persist.

Dixon is newly appointed to the Avon & Somerset police and is currently involved in a case where funeral notices appear to be leading to burglaries. Nevertheless, on a Sunday, when he gets Jake's father's call, he heads over to Cheddar Gorge to see the scene of the accident himself. He decides that, for his own peace of mind, there is something to investigate.

This is one of those novels firmly bedded in the 21st century: FaceBook, Twitter, mobile phones and the tracing of calls etc. I understood most of that but it did add to the technicality of the plot, and wouldn't suit every reader.

About the author
Damien Boyd is a solicitor and crime fiction writer.