Review: IN A HOUSE OF LIES, Ian Rankin 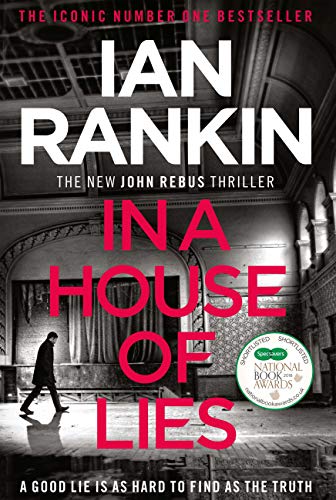 Everyone has something to hide
A missing private investigator is found, locked in a car hidden deep in the woods. Worse still - both for his family and the police - is that his body was in an area that had already been searched.

Everyone has secrets
Detective Inspector Siobhan Clarke is part of a new inquiry, combing through the mistakes of the original case. There were always suspicions over how the investigation was handled and now - after a decade without answers - it's time for the truth.

Nobody is innocent
Every officer involved must be questioned, and it seems everyone on the case has something to hide, and everything to lose. But there is one man who knows where the trail may lead - and that it could be the end of him: John Rebus.

John Rebus often wishes he was still in the police and now there seems to be the perfect opportunity. A cold case surfaces. Something he was involved in ten years ago, when alcohol and cigarettes played more of a role in his life than they do now.

Siobhan Clarke has emerged from a battle with the Anti-corruption unit, unconvicted. She persuades her boss that Rebus can be used to go over the old case files, when the private investigator was just a missing person, an unsolved case.

So all the old protagonists re-surface: Big Ger Cafferty, Malcolm Fox, Rebus and Clarke. And Rebus know all the secrets from ten years ago, all the sloppiness of the police investigation. In the foreground, in tandem, is the case of a boy who has apparently murdered his girlfriend. But his father is targeting Clarke with nuisance phone calls, wanting attention. And hovering over all a nasty pair in the Complaints Unit, corrupt as they come themselves, a finger in every pie, still trying to destroy Clarke.