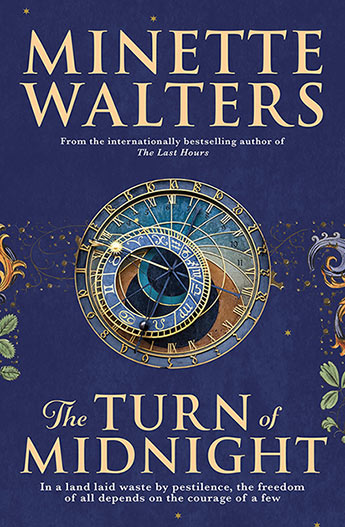 As the year 1349 approaches, the Black Death continues its devastating course across England. In Dorseteshire, the quarantined people of Develish question whether they are the only survivors.

Guided by their beloved young mistress, Lady Anne, they wait, knowing that when their dwindling stores are finally gone they will have no choice but to leave. But where will they find safety in the desolate wasteland outside?

One man has the courage to find out.

Thaddeus Thurkell, a free-thinking, educated serf, strikes out in search of supplies and news. A compelling leader, he and his companions quickly throw off the shackles of serfdom and set their minds to ensuring Develish's future - and freedom for its people.

But what use is freedom that cannot be gained lawfully? When Lady Anne and Thaddeus conceive an audacious plan to secure her people's independence, neither foresees the life-threatening struggle over power, money and religion that follows ...

This is the sequel of  THE LAST HOURS.

It is some time since Lady Anne's husband died outside the walls of his estate from the Black Death. Since then no one has been allowed to enter the walls of Develish without a long quarantine period outside the moat and Lady Anne has come to an understanding of how the pestilence has been transmitted.

However the continuing survival of those inside the walls is now putting pressure of remaining food supplies and Thaddeus Thurkell has taken men to explore the neighbouring towns to see how they've fared. In most cases nearly all the population has died and Thurkell is able to take sheep and grain as well as hoards of gold. He deals with the pestilence by burning the houses and the bodies which are often lying in the open, thus eliminating the rats and the fleas that have carried the plague. In only a few places are there survivors, often as few as 10% of the former population. In nearly all places the nobility and their entourage have fled and not been heard from for some time.

As the winter of 1348 comes closer it appears that the Black Death may have moved on.

This is a fascinating exploration of what the priests and others though had brought the Black Death about, and an enthralling story of a couple's vision in re-establishing the social framework of the county.