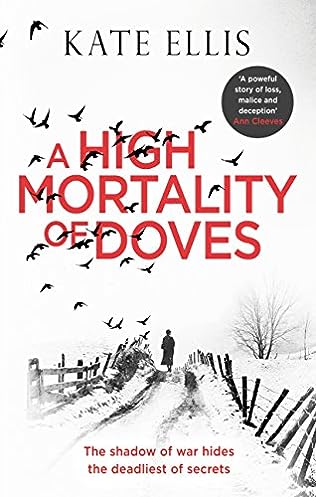 It's 1919. The Derbyshire village of Wenfield is still coming to terms with the loss of so many of its sons when the brutal murder of a young girl shatters its hard-won tranquility. Myrtle Bligh is found stabbed, her mouth slit to accommodate a dead dove. During the war Myrtle volunteered as a nurse, working at the nearby big house, Tarnhey Court. When two more women are found murdered, Inspector Albert Lincoln is sent up from London. Albert begins to investigate, and the Cartwright family of Tarnhey Court and their staff fall under suspicion. With rumours of a ghostly soldier, the village is thrown into a state of panic - and with the killer still on the loose, who will be next?

A murder mystery set in the aftermath of World War One, in a village very much mourning it's dead. Among the victims is a nurse volunteer and a local gossip who runs a tea shop. They are lured to their deaths by malicious notes and are murdered in a local wood.

The story is told from the point of view mainly of Flora Winsome, also a nurse volunteer and the daughter of one of the local doctors.

When the local policeman makes no headway a detective is called in from Scotland Yard, but he too has been damaged by the war.

The influenza epidemic is beginning to hit the village, and so there are a number of factors giving a historical flavour to this police procedural, not the least the ghostly figure of a soldier. The identity of the murderer came as a surprise in the last pages, and I am not sure that the author gave us enough clues.