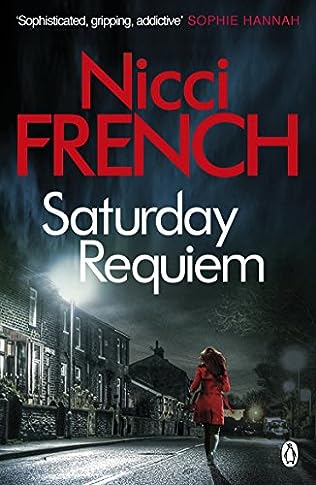 Thirteen years ago eighteen year old Hannah Docherty was arrested for the brutal murder of her family. It was an open and shut case and Hannah's been incarcerated in a secure hospital ever since.

When psychotherapist Frieda Klein is asked to meet Hannah and give her assessment of her she reluctantly agrees. What she finds horrifies her. Hannah has become a tragic figure, old before her time. And Frieda is haunted by the thought that Hannah might be as much of a victim as her family; that something wasn't right all those years ago.

And as Hannah's case takes hold of her, Frieda soon begins to realise that she's up against someone who'll go to any lengths to protect themselves . . .

Saturday Requiem is the sixth addictive and intriguing novel in the Frieda Klein series by the bestselling author Nicci French.

There are threads and characters that connect this novel to ones earlier in the series of which it is #6. You'll see from my list below that I haven't read #5 so I guess that explains why I struggled to "remember" some of the connections.

Once Frieda is asked to look at the case of Hannah Docherty, it is almost inevitable that she is going to consider whether Hannah was wrongly convicted. Hannah is certainly being badly treated, not protected at all from abuse by other inmates, in the psychiatric hospital. And Hannah herself looks much older than she actually is. She is also almost totally uncommunicative. She seems convinced that she actually did kill her family, her mother, stepfather and young brother, but she is also confused and traumatised by the thought.

Frieda becomes convinced that the police investigation was too hasty. In addition only Hannah was  asked to identify the victims and she did that when she was in total shock. The police became quickly convinced that Hannah was the murderer, but also unfit to stand trial.

As Frieda expands her investigation it becomes clear that someone does not want her to find the truth.

The other thread that runs through these novels is about Dean Reeve, a man who stalks Frieda, but at the same time appears to protect her. He is elusive but Frieda is convinced he has recently been in her house.  This thread is designed to link the novels together, but I actually find it annoying and distracting.