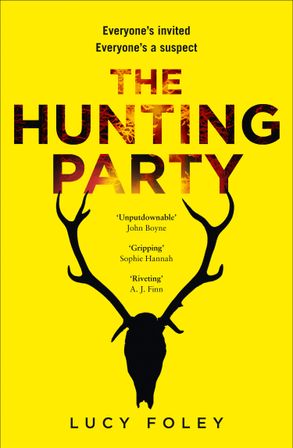 Not an accident – a murder among friends.

They've been meeting every New Year's weekend for as long as most of them have known each other, and everyone has agreed that this remote location north of Fort William in Scotland is the best ever.

Four days in Highland wilderness in cabins and a lodge near Loch Corrin. It's very exclusive, nine guests and the gamekeeper and the manager.

Right from the beginning of the book, on 2nd January 2019,  we know there is a body, but we don't know who it is or, for most of the time, whether it is male or female.

The narration hops around the time frame from 30 December to 2nd January, and from narrator to narrator. So we see events from several sets of eyes, but events don't necessarily overlap.  The guest is reported missing on New Year's Day and the gamekeeper finds the body early the next day.

I must admit to worrying about whether I would find the structure of the novel confusing, but it certainly gives the reader an "insider's view" of the relationships between the characters.  It also preserves the anonymity of the victim, because the person keeps contributing to the narration right up to the end.

About the author
Lucy Foley studied English Literature at Durham and UCL universities. She then worked for several years as a fiction editor in the publishing industry – during which time she also wrote The Book of Lost and Found. Lucy now writes full-time, and is busy travelling (for research, naturally) and working on her next novel.Visit her Facebook page at www.facebook.com/LucyFoleyAuthor and follow her on Twitter @LucyFoleyTweets and Instagram @Lucy_F_Author

You've sold me on this! Scotland, complexified narrative, oh yes.

The cover you have in Oz, by the way, is a LOT livelier than the dreary one on the US edition.