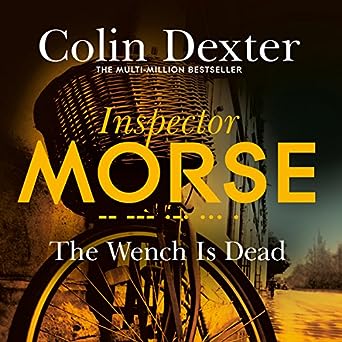 That night he dreamed in Technicolor. He saw the ochre-skinned, scantily clad siren in her black, arrowed stockings. And in Morse's muddled computer of a mind, that siren took the name of one Joanna Franks....

At around 10.15 a.m. on a Saturday morning in 1989 the body of Chief Inspector Morse - though very much alive - was removed to Oxford's John Radcliffe Hospital. Treatment for a perforated ulcer was later pronounced successful.

As Morse begins his recovery he comes across an account of the investigation and the trial that followed Joanna Franks' death...and becomes convinced that the two men hanged for her murder were innocent....

I'm so glad I've discovered this set of unabridged productions of the Morse books. At between 6 and 7 hours they are lovely renditions of Dexter's novels.

Lying in hospital recovering from a perforated ulcer Morse is given a small book written by a recently died patient investigating the very cold case of a woman who was found drowned in the Oxford Canal over 100 years earlier. As he reads he feels there was something wrong with the verdict which convicted 3 canal boatmen of the murder, but he can't put his finger on it. Luckily the man in the neighbouring bed is visited by his daughter who works in the Bodliean, just the sort of research assistant he needs.