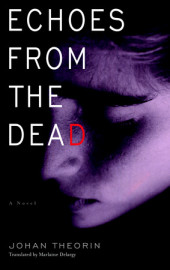 Julia Davidsson's life fell apart when her beautiful son Jens disappeared one foggy afternoon on the remote island of Oland in Sweden. Jen was just six years old, and Julia's relationship with his father had already collapsed. Her own mother had already begun her decline and never recovered, and Julia under-estimated the guilt her father felt afterwards.

Now, twenty years on, Julia, haunted by the need for resolution, returns to Oland to visit her father, and to find out once and for all, what really happened to Jens. Did he fall into the sea and drown, as so many have tried to say, did someone take him, or, illogical as it sounds, is he still alive just waiting to be found?

Julia's father has been sent a package containing what seems to be a sandal Jens was wearing on the day he disappeared. Gerlof Davidsson, coming to the end of his life, too needs resolution. He has always believed Jens was taken by someone, even though a thorough hunt and investigation at the time revealed nothing. He can't shake the thought that Jens's disappearance was somehow connected with the rumoured return of a notorious local killer, Nils Kant. When his friend Ernst is found dead at the stone quarry, Gerlof becomes even more convinced the killer is still at large.

A child's disappearance is the worst nightmare for any parent, Johann Theorin has captured the nightmare that Jens's disappearance created for both Julia and Gerlof very well. The twists and turns their investigation takes as they question the residents of Oland are both believable and unpredictable. The final denouement caught me by surprise.

I was reading something the other day about how we tend to use hackneyed cliches such as "page turner" far too often in book reviews. This is a book though that just keeps you reading. You want to help Julia and Gerlof to find some sort of closure, as well as reconciliation.

I don't know how you talk about the quality of a translation if you can't read the original, but let me say I think this one is well done.

Johan Theorin is one of a number of new Scandinavian crime fiction authors who needs to be on your reading list. His second novel NIGHT BLIZZARD will be out later this year, and I'll certainly be waiting for it.

Read the opening chapters of ECHOES FROM THE DEAD online.

Other reviews to read
I couldn't help but be reminded of other books that I've read that have the same core topic:
Do you like this review? Please give it a rating.

Glad you liked it too Kerrie. Those Swedes sure can write.

Yes, glad you enjoyed this, Kerrie. I would have given this book more points than the Tana French and Harlan Coben "Woods" pair you have in your list, but I guess you read those first!

With the translations - some of them really read like translations, with literal phrases and clunky sentences. I assume that if a book reads naturally, it has been well translated. (I don't mind Americanisms/Anglicisms as I just assume the translation has been done for a particular market.)

The rise of Swedish crime writers is an interesting phenomenon isn't Bernadette. Something to do with the water, the climate??

I'm not sure that my ratings are reliably absolute Maxine. I think sometimes I should have a rule not to use the bits between 4 and 4.5 and 4.5 and 5.
I think also I've tended to refine my expectations and really this year I've not read much that has really blown my socks off.