Review: I HEAR THE SIRENS IN THE STREET, Adrian McKinty - audio book 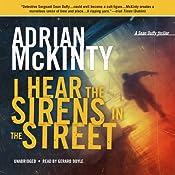 A torso in a suitcase looks like an impossible case, but Sean Duffy isn’t easily deterred, especially when his floundering love life leaves him in need of a distraction. So with detective constables McCrabban and McBride, he goes to work identifying the victim.

The torso turns out to be all that’s left of an American tourist who once served in the U.S. military. What was he doing in Northern Ireland in the midst of the 1982 Troubles? The trail leads to the doorstep of a beautiful, flame-haired, twenty-something widow, whose husband died at the hands of an IRA assassination team just a few months before.

Suddenly Duffy is caught between his romantic instincts, gross professional misconduct, and powerful men he should know better than to mess with. These include British intelligence, the FBI, and local paramilitary death squads - enough to keep even the savviest detective busy. Duffy’s growing sense of self-doubt isn’t helping. But as a legendarily stubborn man, he doesn’t let that stop him from pursuing the case to its explosive conclusion.

This is the sequel to THE COLD, COLD GROUND which I reviewed last year. Set in Northern Ireland during the Troubles in 1982. When a male torso turns up in a suitcase, the suitcase turns out to have belonged to a man murdered by the IRA the previous year. The widow lives on an isolated estate and from the beginning Detective Inspector Sean Duffy can see that there are elements of her story about her husband's murder that don't quite jell. One thing leads to another and Sean identifies the body as that belonging to an American tourist. Even there, there is something wrong with the story.

With his passion for tying up loose ends Sean eventually follows the story even when he has been expressly warned off. This is noir crime fiction laced with Sean's own peculiar sense of humour. There's not just the blackness in the plot, but blackness in the setting - Northern Ireland on the brink of economic disaster, its last remaining industry whimpering to its death.

Adrian McKinty is a master story teller, the writing well polished, the characters well drawn. The dangers of living and working in Northern Ireland in the Troubles are vividly brought to life. He takes us to a time and place few of us have experienced first hand.

The narrator Gerard Doyle does an excellent job.

A new author for me! Will see if my library has this one. Thanks!