Crime Fiction Alphabet 2013: O is for THE OFFICE OF THE DEAD, Andrew Taylor

Following a pattern established in 2012, my contributions to the Crime Fiction Alphabet in 2013 will mainly feature authors or books that I have read recently. 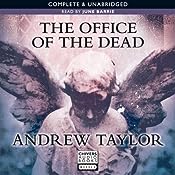 It's 1958, and the party's over for Wendy Appleyard: she finds herself penniless, jobless and on the brink of divorce. Who better to come to her rescue than her oldest friend, Janet Byfield?

So Wendy goes to stay with Janet, who seems to have everything Wendy lacks: a handsome husband, a lovely little daughter, Rosie, and a beautiful home in the Cathedral Close of Rosington. David Byfield is on the verge of promotion, and Janet is the perfect wife for an ambitious young clergyman. But perfection has always been dangerous, and gradually the idyll sours.

Old sins come to haunt the present and breed new sins in their place. The shadow of death seeps through the Close, and with it comes the double mystery stretching back to turn-of-the-century Rosington, to a doomed poet-priest called Francis Youlgreave.

Only Wendy, the outsider looking in, glimpses the truth. But can she grasp its dark and twisted logic in time to prevent the coming tragedy. The Office of the Dead is a chilling novel of crime and retribution, and is the third volume of Andrew Taylor's stunning and acclaimed Roth Trilogy.

See what others have chosen for the letter O.