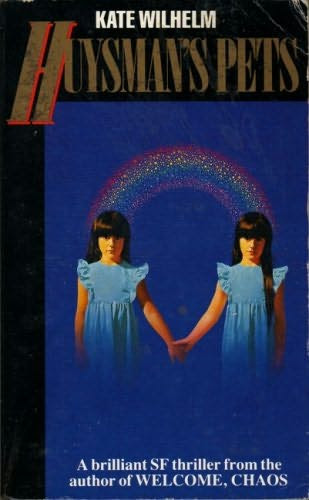 I am fascinated when I come across records like this one, because it shows how twenty years ago I was reading books I very likely wouldn't even consider today. In 1993 I read three Kate Wilhelm titles,  a mere drop in the ocean when you consider what a prolific writer she has been.

Publisher's blurb
Stanley Huysman was a Nobel laureate whose visionary theories of his later years, bridging biology and physics, came to be labeled crackpot ideas. The true genius of these experiments becomes clear only when Huysman's widow calls on Drew Lancaster to write the scientist's biography. As Drew deciphers the man's notes, to crack the code of government-funded projects and the secrecy of Huysman's unscrupulous assistant, Claude Dohemy, it is revealed that the great man actually achieved what he set out to do. By genetic manipulation, he induced telepathy in his subjects. But Dohemy is now holding those subjects children prisoner, and it is only their extraordinary powers that free them. This lively thriller is made especially appealing by its instantly engaging characters and its deftly dovetailed plot.

Kate Wilhelm's novels seem to have been in tune with what I call my science fiction reading phase. Many of them seem to have been aimed at a YA audience, and as i was teaching high school English at the time perhaps it explains why I was reading them. She was inducted into the Science Fiction Hall of Fame (2003) for her lifetime contribution to the genre.

Kerrie - Interesting! I must admit this probably wouldn't be something I'd read, but it is so interesting to see what people read at different times in their lives.

Kate Wilhelm's books are all worth reading. She's an underrated writer who's been productive for decades.

No, Kerrie, while her protagonists can be children, Kate Wilhelm is almost never a YA-oriented writer...she is, instead, one of the more subtle and more unlikely to respect "genre" "boundaries" writers you're likely to read...as even the blurb for this novel suggests. If you want to try her again, and haven't read it, try DEATH QUALIFIED, the first of what has subsequently been a rather more conventional (and impressive) series of legal procedurals, but this first one is as much a bravura straddler of different approaches to fiction as anything she's written. CITY OF CAIN is another fine example form before HUYSMAN'S and DQ.