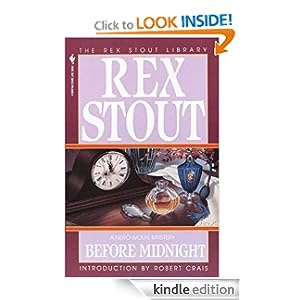 Synopsis  (From the Nero Wolfe site)

The agency is conducting the biggest prize contest ever, with prizes totaling one million dollars. Just one man knows the solutions in the million-dollar contest, and it's his disappearance that introduces Nero and Archie to the world of four-color spreads and TV spectaculars. It introduces them also to a murderer who has the audacity to kill in Nero's office and before Nero's very eyes.

After Rex Stout unfolds this novel, it is possible that the advertising world will never be the same - and this may be a public service..

My crime fiction education is probably very neglected in that I have never read Rex Stout, although I have seen the occasional television story.

The prelude to the Kindle version is an interesting introduction to the two main characters Nero Wolfe and Archie Goodwin, and gave me some tips about what to look for in their relationship.

The basic idea of the plot was a good one - a marketing campaign that involves a quiz, that has involved millions country wide and has now been narrowed down to 5 contestants. And then the final questions are distributed and the question creator takes a slip of paper from his wallet and waves it about claiming that on the paper are written the answers to the final questions. Before the night is out, he is dead and the wallet is missing.

Nero Wolfe takes a commission from the cosmetics company behind the contest to investigate, not the murder, but who took the wallet. He is careful to say he is not undertaking a murder investigation to keep his nose clean with the police whom he has crossed many times. If the murderer though happens to be the same person as the one who took the wallet, so be it.

This is a relatively short book but a sign of how little it interested me was how long it felt. It felt very technical, lots of carefully worked out, logical, scenarios that left me cold. I made it to the end, just, but I doubt I will trouble to read another Nero Wolfe. That's probably anathema to his fans but his writing is just not for me.

You have to have a taste for Nero Wolfe. Mostly the fun is in the banter between Wolfe and Archie Goodwin, his sidekick.

Also, some books are better than others. I've read several I liked, and some I was neutral about.

I will keep reading them. They are very relaxing, I like to laugh when I'm reading, and I love within a stone's throw of Wolfe's brownstone.

Maybe being a New Yorker helps as the books' manner and humor is consummate New York.

Kerrie - Kathy's got a point that either one has a taste for Rex Stout or one doesn't. Certainly his focus was far more on the logic and intellect involved in solving puzzles than in a lot of character evolution. I am sorry, though, to hear that you didn't like this one better than you did.

I've not read this one. But, honest, from the sound of your review (and I've learned to trust your judgment), this isn't one of Stout's best. There are some good ones out there, really!

I WOULD VERY MUCH APPRECIATE YOUR VIEWS