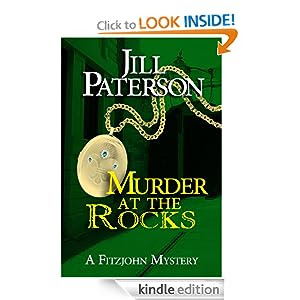 When Laurence Harford, a prominent businessman and philanthropist is found murdered in the historic Rocks area of Sydney, Detective Chief Inspector Fitzjohn is asked to solve the crime quickly and discreetly. After barely starting his investigation, uncovering a discarded mistress and disgruntled employees, a second killing occurs.

Meanwhile, Laurence's nephew, Nicholas Harford, has his certainties in life shaken when he becomes a suspect in his uncle's death, and receives a mysterious gold locket that starts a chain of events unravelling his family's dark truths.

This is #2 in Jill Paterson's Fitzjohn series. The first, THE CELTIC DAGGER, was a winner of the NSW Writers Centre New Holland Publishers 2008 Genre Fiction Award.

To be honest, I found the basic story of MURDER AT THE ROCKS interesting, but weighed down by an overly complex plot and flat dialogue.

I tried to warm to the main sleuth DCI Fitzjohn. He has many likeable traits:
" a policeman of the old guard, ... methodical painstaking methods viewed by some as archaic".
His wife has recently died. His offsider is called Betts, but he never quite seems to make it as a good foil to Fitzjohn. But having finished the novel I can't for the life of me think what Fitzjohn's first name is.  I think that is because I rarely read it.

MURDER AT THE ROCKS is a passable cozy, but, like many self-published e-books, in sad need of a bit more careful proof reading / editing. I'm usually pretty tolerant of errors of structure and language but these began to annoy me after a while.

The novel has a gothic, old-fashioned, feel to it, reminding me of early police procedurals like the first Gideon stories. I struggled to place it in a period of time, and then latterly discovered it is probably meant to be contemporary, certainly a couple of decades after the ending of the Vietnam War. The first murder takes place in Sydney's Rocks area, but apart from reference to New South Wales place names like Bowral and Newcastle, it gains little from that setting.

Jill Paterson's blog
About the author
I'm a writer of murder mysteries with my first book, The Celtic Dagger, being published by New Holland Publishers in October 2010. I have since self published my second book, Murder At The Rocks. I live in Australia, am an avid reader, love going to the theatre, travelling, and delving into my family's genealogy.

Kerrie - I'm sorry to hear this one didn't have what it takes for you. I've been wanting to try Patterson but perhaps I'll start with The Celtic Dagger.