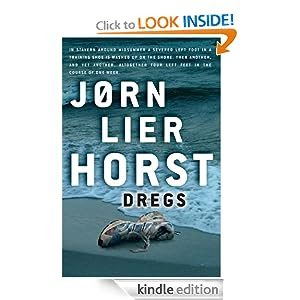 Meet Chief Inspector William Wisting, Head of CID in Larvik, Norway, the latest unforgettable import from Scandinavian crime fiction. An experienced policeman who is familiar with the dark side of human nature, he lives in challenging times for the Norwegian police force, meeting them with integrity and humanity, and a fragile belief that he can play a part in creating a better world. A police report of a shoe containing a severed foot washed up on the sand introduces CI William Wisting. Soon a second is washed up, but it is another left. Has there been some kind of terrible accident at sea?

An excellent Norwegian police procedural, #6 in the William Wisting series, but the first to be translated into English, that has me grinding my teeth that there are not more available.

The idea of the appearance of using specific body parts, in this case left feet, washing up on beaches one after another, is not a new one but definitely a good hook into a murder mystery.

William Wisting, Chief Inspector of Police, is at burn out point, and at the beginning of the novel we meet him as he leaves the doctor's surgery where he has had some blood tests. He believes that crime in Norway is beginning to pay, growing rather than decreasing, and that none of the counter measures are effective deterrents. His daughter Lina is a journalist writing an article on the effects of long prison sentences on criminals, particularly those who have committed murder. There is inevitably an overlap between elements of her father's new case, and the interviews with murderers that she has set up.

As the number of left feet being washed up on nearby shorelines reaches 3, the police establish a link between one of them and an old man who disappeared from a nursing home 9 months earlier. But three elderly men disappeared without trace at that time, and the story is made more complex by the fact two women also disappeared: one a schizophrenic disappeared 9 months ago, and one, more recently, also from the nursing home.

Check this news report from 2008

Jorn Lier Horst was born in 1970, in Bamble, Telemark, Norway. He has worked as a policeman in Larvik since 1995. His debut novel in 2004, Key Witness, was based on a true murder story. The William Wisting novel series has been extremely successful in his native Norway as well as Germany and the Netherlands. Dregs is his first book published in English.

Glad you liked it. It seems like everyone who's read it thought Dregs an excellent mystery.

I was given a copy as a gift, but haven't picked it up yet. Loaned it to a friend, who said it's one of the best Scandinavian mysteries.

So it's on my TBR pile. I got a bit tired of severed feet last year between Fred Vargas' and Kjell Eriksson's latest books.

I've been taking a break from this plot element, but now reading a book by William Deverell, a foot has washed up out of the sea. So, can't get away from it.

I'll read Dregs over the summer.

Kerrie - Like Kathy, I haven't gotten to this on my TBR list yet, but I need to. Everything I read says that this is an excellent read. Thanks for the reminder of it.

thanks for the reminder about the Vargas feet Kathy