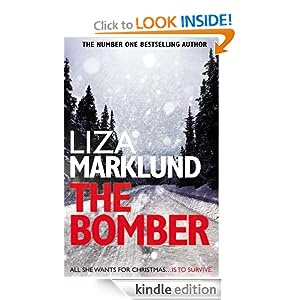 Seven days. Three killings. And one woman who knows too much...Crime reporter Annika Bengtzon is woken by a phonecall in the early hours of a wintry December morning.

An explosion has ripped apart the Olympic Stadium. And a victim has been blown to pieces. As Annika delves into the details of the bombing and the background of the victim, there is a second explosion.

These chilling crimes could be her biggest news story yet. When her police source reveals they are hot on the heels of the bomber, Annika is guaranteed an exclusive with her name on it. But she is uncovering too much, and soon finds herself the target of a deranged serial killer...

The suspense level in THE BOMBER is enhanced by the fact that the action, the bomb blast at the newly constructed Olympic stadium in Stockholm, takes place just a week before Christmas. This has the effect of a sort of count down, can the police or the journalists solve the mystery before Christmas Day?

Once the identity of the bomb victim has been established, there are many, including journalists, who believe that it is a threat by terrorists against the Olympics being held in Stockholm. Others, police included, believe it is an inside job, directed personally against the head of Sweden's Olympic Committee Bid. The first point of view seems reinforced when a second bombing occurs at another Olympic venue.

For Annika Bengtzon, head of a newspaper's crime section, reporting the bombings brings it's own challenges. She has spent a number of years establishing a relationship with a police "deep throat" but much of what he tells her can't be released to the public. Members of her own team begin to challenge Annika's authority when she refuses to use the terrorism line.

Annika is also a young mother whose husband has a stressful job too, and Marklund explores the strains of their relationship particularly when Annika's job puts her family in danger. It is clear that the author is also using the novel to explore what happens when a woman works in a male-dominated profession.

Another issue that surfaces from the author's journalism background is that of the steps print newspapers have to take to survive in a world of technological change. I thought there was maybe a little too much about marketing strategies but the bits about the tough decisions that chief editors have to make to ensure that their papers survive was well done.

The novel comes with its own puzzle too: there are seven chapters with headings: Existence, Love, Humanity etc. The reader is never clearly told until the end whose life story these chapters describe.

This edition of the novel comes with an afterword by Lisa Marklund explaining the inspiration for the novel. There Marklund reveals that THE BOMBER was intended to be title #4 in a contracted series  on Annika Bengzton but in fact the series has turned out differently:

I have heard good things about this series. I'm glad you reviewed the first one, so I can have a better idea now if I want to read this series. It does sound intriguing now, with the jobs and marriage strains being shown on the characters.

I really enjoy the Annika Bengtzon series and also found the movie Paradis on SBS a few nights. Thanks for the chronography of titles. I can now get my series in order. Unfortunately started with #1 then jumped to #4 inadvertantly. Thanks for the review. This one is on my TBR shelf.