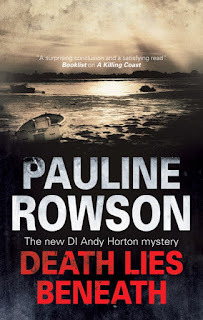 Detective Inspector Horton is not so sure, and is thrown into a complex and frustrating investigation when a body is found on a rotting boat being salvaged in Portsmouth Harbour.

As the pressure to solve the case increases, Horton receives a chilling personal message; time, it seems, is also running out for him . . .

If you've not met this British police procedural series based around Portsmouth Harbour and the Isle of Wight, allow me to recommend them. DEATH LIES BENEATH is #8 in the series and probably not a good place to start, simply because sequential character and setting development connects all the novels in a sort of linear fashion.

Horton's personal story includes a failed marriage, the fight for access to his young daughter, and a search for the truth about why his own mother disappeared when he was very young. In each novel the author balances these factors against a mystery, and usually at least one murder.

Pauline Rowson is an excellent constructor of false trails and DEATH LIES BENEATH is no exception. Ex-con Darryl Woodley's death results in a funeral which Horton and a photographer attend just to see who else turns up, in an effort to solve the crime of Woodley's murder. A woman whom Horton can't identify appears at the funeral but before 24 hours have passed, her body is found at Portsmouth Harbour. The diving team looking for her handbag finds another body that has been on one of the wrecks for a number of years. Three bodies seems a huge coincidence and Horton doesn't believe in them, but are the three murders connected?

At the same time a bit more evidence seems connected to Horton's missing mother, Jennifer, but it doesn't seem he is much closer to knowing what happened to her.

I really enjoy these books. They are carefully plotted and Andy Horton is a likeable if flawed character.

Pauline Rowson is the author of the DI Andy Horton Marine Mystery series of crime novels and thrillers.
Visit http://www.rowmark.co.uk for more information.
Follow Pauline Rowson on Twitter http://twitter.com/PaulineRowson
Or visit the Marine Mysteries Face Book Page
http://www.facebook.com/#!/pages/Marine-Mystery-Crime-Novels/24228588099
Member of the Crime Writers' Association of Great Britain, and The Society of Authors