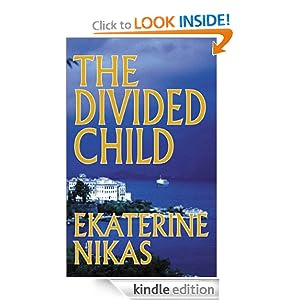 All Christine Stewart wants is a relaxing vacation on the beautiful Greek island of Corfu. Then she meets nine-year-old Michael Redfield and saves him from being crushed by a falling piece of Byzantine stone.

Invited to spend the rest of her holiday at the luxurious villa where Michael is staying with his family, Christine soon realizes something is wrong with the Redfield clan.

Michael's stepmother is openly hostile, her brother is charmingly seductive, and Michael's handsome uncle seems obsessed with the death of his brother--Michael's father.

Christine has no desire to become even more deeply embroiled in the family's problems, but how can she abandon Michael when she learns he is the pawn in a nasty custody battle...and the target of a killer?

There is an old-fashioned feel to this plot: it reminded me of those romantic thrillers of the 1950s and 1960s by Mary Stewart.

After she makes the decision to stay at Ithake because she is convinced that Michael Redfield's life is in danger, Christine Stewart is no longer sure who she can trust. Is Michael's uncle Geoffrey really trying to keep his nephew safe or does he have an eye on Michael's inheritance? Yet another attempt appears to be made on Michael's life, and then someone takes a potshot at Christine. Just what is going on?

A well constructed thriller but, as I said a little earlier, with the feel that it belongs to earlier days, although events actually set it in the 21st century. Christine for example is a computer graphic designer. The plot has an improbable feel: for example Michael's mother is presumed to have died when he was two but actually agreed to disappear from his life.

I've found it difficult to find out anything about the author, although THE DIVIDED CHILD feels like a debut novel, and I'm assuming it has been translated from Greek. Perhaps someone can give me more information.

As I was reading the review I was thinking, exactly, 'sounds like Mary Stewart in the 1950s'! None the worse for that, and as you say, it would be good to know more about the author.