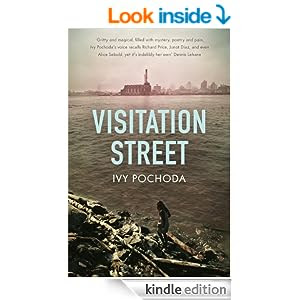 Summer in Red Hook, Brooklyn, a blue collar neighbourhood where hipster gourmet supermarkets push against tired housing projects, and the East River opens into the bay. Bored and listless, fifteen-year-old June and Val are looking for some fun. Forget the boys, the bottles, the coded whistles. Val wants to do something wild and a little crazy: take a raft out onto the bay.

But out on the water, as the bright light of day gives way to darkness, the girls disappear. Only Val will survive, washed ashore semi-conscious in the weeds.

June's shocking disappearance will reverberate in the lives of a diverse cast of Red Hook residents. Fadi, the Lebanese bodega owner, trolls for information about the crime. Cree, just beginning to pull it together after his father's murder, unwittingly makes himself the chief suspect - although an elusive guardian seems to have other plans for him. As Val emerges from the shadow of her missing friend, her teacher Jonathan, Juilliard drop-out and barfly, will be forced to confront a past riddled with tragic sins of omission.

In VISITATION STREET, Ivy Pochoda combines intensely vivid prose with breathtaking psychological insight to explore a cast of solitary souls, pulled by family, love, and betrayal, who yearn for a chance to escape, no matter the cost.

First of all I'm going to say this is not really crime fiction although crimes are committed in the novel's background. It is more an exploration of how one girl copes with the disappearance of her friend, of what makes up the community of Red Hook on the waterfront in Brooklyn, of how residents work to create community cohesiveness, and the lengths that someone will go to to pay a debt.

Ivy Pochoda creates a vision of a community that is haunted by the ghosts of the past. Sometimes the voices of the past reach out and keep the people of the present anchored there.
There was a passage that I particularly liked:


He understands what keeps Gloria in Red Hook. It’s not what is here now, but what was here back when—the history being buffed and polished away in the longshoreman’s bar.

As he crosses from this abandoned corner of the waterside back over to the Houses he becomes aware of the layers that form the Hook—the projects built over the frame houses, the pavement laid over the cobblestones, the lofts overtaking the factories, the grocery stores overlapping the warehouses.

The new bars cannibalizing the old ones. The skeletons of forgotten buildings—the sugar refinery and the dry dock—surviving among the new concrete bunkers being passed off as luxury living. The living walking on top of the dead—the waterfront dead, the old mob dead, the drug war dead—everyone still there.

A neighborhood of ghosts. It’s not such a bad place, Cree thinks, if you look under the surface, which is where Gloria lives.

Hovering on the horizon is the imminent arrival of the Queen Mary II, promising great things for Red Hook, and in the long run failing to deliver.

This is a book that will provide many engrossing talking points.
My rating: 4.6

See review on Reactions to Reading

I loved this book, I'm glad you liked it too.

I loved this book, too, the characters, the descriptions of Red Rook, the interpersonal relations and interactions, the humanity, the solidarity.

I read a library book, then ordered a used copy just to loan to friends.

There is a mystery, but it's not what we crime fiction readers expect. It's more about human
relations.

Ivy Pochoda is working on another book, thankfully.