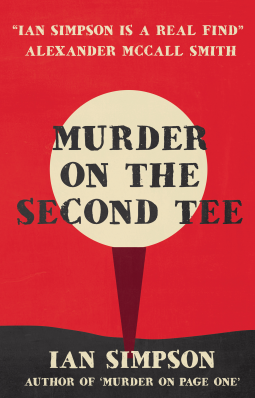 The first blow took Hugh Parsley by surprise. It fractured his right temporal bone and tore the middle meningeal artery. He stumbled and fell face down on the grass. A blow to the back of his neck cracked the occipital bone at the base of his skull. He was struck several times about the left temporal area. His brain ceased to function. Hugh Parsley was dead.

Murder on the Second Tee is the follow-up to the popular crime fiction novel Murder on Page One.

The directors of the niche Bucephalus Bank are meeting in a St Andrews hotel. One of them is found dead on the golf course. It is Flick Fortune’s first case as a detective inspector. As she struggles to uncover the murderer behind the bank’s respectable façade, she receives unexpected help from Detective Sergeant Bagawath Chandavarkar (Baggo), who is investigating a multi-million pound money laundering scam.

Another murder follows and Flick’s old boss and tormentor, ex-Inspector No, makes an unwelcome intrusion before the truth is revealed...

I think this novel suffered by being the second in a "series" where the author decided to change the central detective after the first novel. Flick Fortune appears to have been a detective sergeant in the first novel, and has been recently promoted into the position vacated when her old boss retired. Unfortunately for her the author has decided to give him a role as a private investigator on Flick's first case as a detective inspector.

The plot has a lot of potential:  the first murder takes place in Scotland on the second tee of the most famous golf course in the world; but the bank is that employs the victim is an English one that has already come to the attention of the English police for its money laundering activities. The board of the bank is having a weekend away at St. Andrew's to attempt to resolve a board vacancy and some irregularities. The murder victim is one of the directors.

But for me the writing didn't quite hit the mark. The business of money laundering becomes quite complex and involves a shady American bank and some gangster like figures. While Flick Fortune is in charge of the murder investigation, an under cover cop does what he likes with the money laundering investigation. There are some unlikely scenarios towards the end of the story.

About the author (Net Galley)

Ian Simpson is inspired by a number of authors, including PG Wodehouse, John Mortimer and William Boyd. His writing style is comparable to Christopher Brookmyre. Murder on the Second Tee is a pacey whodunit, laced with the humour that drew glowing reviews for Ian’s first novel, Murder on Page One. website