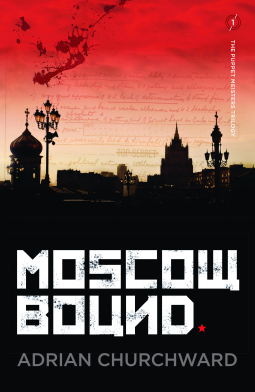 She believes he's been languishing for decades without trial in the Gulag system. Meanwhile, General Pravda of military intelligence, though an advocate of transparency, is determined to protect a covert operation that he's been running for years.

General Pravda hinders Ekaterina and Scott at every turn and lawyer and client are forced to go on the run for a murder they didn't commit. As they descend into the Hades that is the world of international realpolitik Scott is compelled to reconsider his own values, and Pravda's life's work disintegrates, when Scott uncovers a 50 year-old Cold War secret, which both the Russian and US governments are still trying to hide from the public domain.

'Moscow Bound' is the first book in The Puppet Meisters trilogy, dealing with state abuse of power.

I really struggled to get into this book. There just seemed to be too much going on right from the beginning and I couldn't work out what the connection was between the "missing father" plot and whatever General Pravda was up to. And then about half way through, there was a glimmer of light and I thought I knew where the story was going and what the possible connection was between the two main strands. That's quite a lot to ask of a reader. Perhaps other readers won't be as obtuse as me.

However, after my glimpse of where we were headed, the reading experience did not really improve much. There were just too many characters to keep track of, too many sub-plots, and in the long run, for me, it strained the bounds of credibility.

This book was not for me, but I am willing to believe that others might find it a fascinating read.

About the author -
Adrian Churchward is an English solicitor who has worked in commercial law practices for over thirty years in London, Los Angeles and Eastern Europe. He holds an M.Phil. from Essex University in Comparative International Law. His hobbies include writing and film-making.

He first acquired a taste for Russian culture in his early teens when he immersed himself in the works of Dostoyevsky and Gogol, rather than the school’s curriculum of Shakespeare and Chaucer. A sight-seeing visit to Leningrad (now St. Petersburg)  followed in 1973 and laid the foundations of his life-long interest in the Russian people and language. For more see website