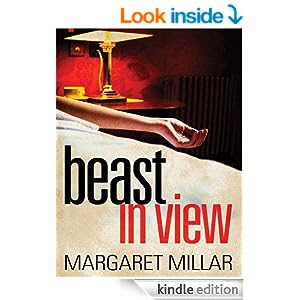 At thirty, Helen Clarvoe is alone: her only visitors are the staff at the hotel where she lives, and her only phone calls come from a stranger.

Until that stranger, with a quiet, compelling voice, lures the aloof and financially secure Miss Clarvoe into a world of extortion, pornography, vengeance, madness and murder.
But who is the hunter and who is the victim...?

A gothic chiller which still feels incredibly modern, BEAST IN VIEW is a true classic of the crime fiction genre.

As others have commented, this has a staggeringly modern feel to it. It also feels as if it has cinematographic qualities. There is an incredible twist in the tail which apparently is a characteristic of most of Margaret Millar's novels.

Since her father's death, Helen Clarvoe has been estranged from her mother and brother who live in increasing poverty in the family home. Helen apparently inherited all her father's money but lives the life of a wealthy recluse although she is only thirty.  When Helen is contacted by a voice from the past she becomes scared and implores a friend of her father's to track Evelyn Merrick down. Then begins a breathtaking spiral of events, eventually ending in three deaths.

Published in 1955 BEAST IN VIEW won the  Edgar Award in 1956 and was later adapted for an episode of the television series Alfred Hitchcock Hour in 1964.
It also made the list of The Top 100 Mystery Novels of All Time that was issued in 1995 by the Mystery Writers of America.

I've read this novel as my contribution to Past Offences #1955book meme of February this year.
Fellow blogger Jose Ignacio at The Game's Afoot is also reading it.

About the Author
Margaret Millar (1915-1994) was born in Ontario, Canada and was educated at Kitchener-Waterloo Collegiate Institute and the University of Toronto, majoring in classics. In 1938 she married Kenneth Millar (who wrote under the name Ross Macdonald). She published her first novel, The Invisible Worm, in 1941 and she worked as a screenwriter for Warner Brothers. She was active in the conservation movement in California in the 1960s and was named a Woman of the Year by the Los Angeles Times in 1965, and in 1982 she became a Grand Master of the Mystery Writers of America.

I think Millar was so good at thsoe 'downward spiraling' stories, Kerrie. Glad you enjoyed this one.

Thanks Kerrie, glad you liked your 1955 read. I keep meaning to read more Margaret Millar.

By a coincidence I'm just re-reading The Fiend by Margaret Millar. I first read it a long time ago, discovered my copy had gone missing and bought another recently. I'd forgotten how good she is, and I'm blown away with admiration at the way every word rings true. Never mind my TBR pile, I'm going to have to re-read more of hers, including Beast in View. Before, I always regarded A Stranger in my Grave as her best, by a tiny whisker.

I've enjoyed all the Margaret Millar books I've read. Her husband, Kenneth Millar (aka, "Ross Macdonald") was a pretty good writer, too.