Review: A IS FOR ALIBI, Sue Grafton 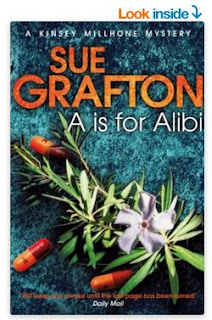 
"My name is Kinsey Millhone. I'm a private investigator, licensed by the state of California. I'm thirty-two years old, twice divorced, no kids. The day before yesterday I killed someone and the fact weighs heavily on my mind..."

When Laurence Fife was murdered, few cared. A slick divorce attorney with a reputation for ruthlessness, Fife was also rumoured to be a slippery ladies' man. Plenty of people in the picturesque Southern California town of Santa Teresa had reason to want him dead. Including, thought the cops, his young and beautiful wife, Nikki. With motive, access and opportunity, Nikki was their number one suspect. The Jury thought so too. Eight years later and out on parole, Nikki Fife hires Kinsey Millhone to find out who really killed her husband. But the trail has gone cold and there is a chilling twist even Kinsey didn't expect...

I chose to read this book for the Crime Fiction of the Year Challenge over at Past Offences, thinking it had first been published in 1987. I now know that it was published in the USA in 1982.

It is a significant book because it was the first in Sue Grafton's "Alphabet Series", with Kinsey Millhone as the central figure, and it sets the stage for Kinsey's sleuthing career.
Kinsey was born in 1950, but she really hasn't aged like the rest of us (I think she has reached a point where she doesn't age any more) . And around her Sue Grafton has built a "family" of characters, adding human elements to crime fiction scenarios that often reflect events in American society or politics.
It is also an important book because it set the benchmark for a number of series by other authors that featured female PIs.

Interestingly it is the first in the series that I appear to have read since beginning this blog. I appear to have 4 to catch up on: U, V, W, and X.
I did write about A IS FOR ALIBI as a "forgotten book" nearly 6 years ago. My post is here.

You give such insight into this series, I've read a few, but must confess, I find them somewhat boring. For me they are a beach read, something I can pick up at any time with out any real investment. But, I hadn't thought of the significance of a female PI. Living/married to a PI, it's not that exciting, really. thanks for your thoughts.

I like this series very much. I did find a low point round the middle of the alphabet, and got behind, but am liking the later ones very much. It would be interesting to re-read A and compare with later ones.

I read this series for many years but ultimately it grew tired for me, I think. She would have done better to not choose the alphabet as a end point.