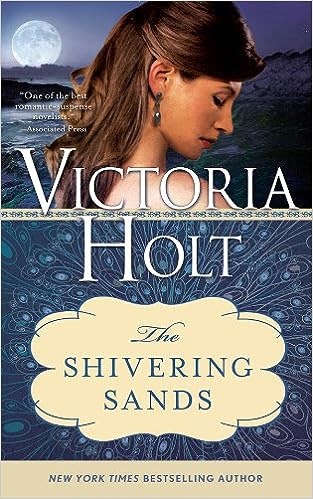 Caroline knows something is wrong. Her sister Roma has gone missing, and no one can tell her why. The only option is to go where Roma was last seen—an estate with a deadly history...

The Stacy family has lived off the Dover coast for generations, carefully navigating the treacherous quicksands nearby. But the sands aren't Caroline's biggest threat. Everyone here has a secret, especially enigmatic young heir Napier Stacy. No matter where Caroline turns, the ground she walks is dangerous. And the closer she comes to unraveling the truth, the closer she comes to sharing her sister's fate...

I read this for  the Crime Fiction of the Year (1969) Challenge, a meme housed at Past Offences.
In my younger days I read lots of Victoria Holt, and so I wanted to see whether for me this title weathered the test of time.

Perhaps unsurprisingly I found the plot developed much more slowly than it would in a more recently written novel. There are very heavy Gothic overtones right from the beginning: the black sheep of the family who accidentally murdered his elder, popular, handsome elder brother, banished to Australia but now summoned to return by his dying father to marry his father's ward; the mysterious disappearance of Caroline's sister from an archaeological dig; a building destroyed by fire where lights now show at night.

One of the aspects of the plot that has interested me is the actual time setting of the story. I have come across a reference to the vicar being appointed in 1888 so I am assuming it is all late 19th century. There are other factors that reinforce this: the curate goes off to Africa as a missionary, the main mode of transportation is horseback or trap, and there are no mentions of the dislocations that World War One will later cause.

So is this crime fiction? It is a question I constantly asked myself as I was reading. Certainly crimes have been committed - there is no doubt right from the beginning that Napier killed his brother Beau, accident or not, and these days that would have led to a homicide trial, rather than a retribution exacted by his father. And there are two other unexplained disappearances. But this is much more Gothic romance, closer to Daphne du Maurier and Georgette Heyer rather than Agatha Christie. The ending made me think of Edgar Allen Poe.

And here is an author that eventually led me on to crime fiction addiction.

About the author
Victoria Holt 1906-1993 was a pseudonym used by Jean Plaidy.

Great title, enticing review, lousy cover (looks like a YA romance). Screw the cover, you sold me!