Review: BALLAD OF A DEAD NOBODY, Liza Cody 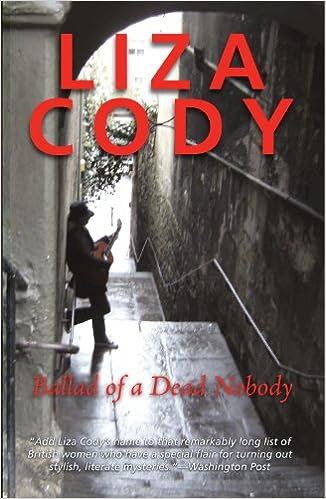 Elly Astoria had a miraculous musical talent. As a little girl she taught herself to play guitar and keyboard so that she could feed herself and her junkie mother. One rainy night she was spotted singing and playing by the founder of an indy women’s band. Later, cleaned up and better fed, she caught the eye of her future manager – and his creepy sister. It should have been a rags-to-riches story. Instead Elly’s career was cut short by her perverted and grisly murder.

Years after her death it looks as if Elly’s life has been overlooked. If anyone deserves rediscovery and a biography, it’s Elly. Clearly there is a story to be told and a mystery to be solved. But how?

Liza Cody is an author who went off the radar for the first decade of this century. I do remember reading BUCKET NUT and MONKEY WRENCH when they were published twent years ago. I think I also read some of her Anna Lee series.

This book though was quite different to what I expected. The structure is a series of recorded interviews, excerpts from letters, emails and telephone messages which Amy makes in her quest to write a book that will make her mark in the world. Once she settles on the idea of a biography about Elly Astoria, Amy discovers that there is bit more to being a biographer than just collecting material. What do you do about the gaps where you haven't a clue where the truth lies? For example no one was ever charged with Elly's murder. Is a biographer a detective too?

Amy's quest takes her to tracking down members of MotherHood, the band Elly was "adopted" by, and she makes some odd discoveries. The band broke up straight after Elly's death and went their separate ways, although they and Elly's agents continued to get income from recordings and performance rights.

There was a point when I nearly gave up on reading the book. It began to seem rather long winded and disjointed and Amy seemed no closer to the truth. I'm glad I didn't give up though.

About the author
Liza Cody is an English crime fiction writer. She is the author of thirteen novels and many short stories. Her Anna Lee series introduced the professional female private detective to British mystery fiction.
Cody was born in London and most of her work is set there. Currently she lives in Bath in England. Her informative website can be found at www.LizaCody.com.

Ever a soft spot in me heart for a dead nobody. I like the look of this one. Thanks for the tip.