Review: THE CASE OF THE VELVET CLAWS, Erle Stanley Gardner 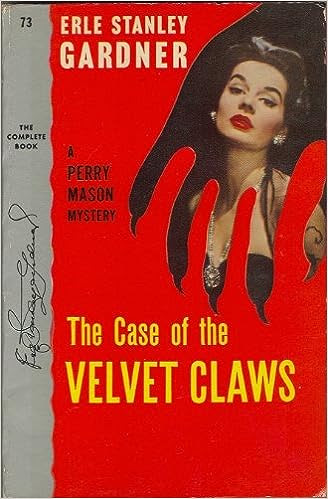 Thanks to a bungled robbery at a fancy hotel, the already-married Eva Griffin has been caught in the company of a prominent congressman. To protect the politico, Eva's ready to pay the editor of a sleazy tabloid his hush money. But Perry Mason has other plans. He tracks down the phantom fat cat who secretly runs the blackmailing tabloid -- only to discover a shocking scoop.

By the time Mason's comely client finally comes clean, her husband has taken a bullet in the heart. Now Perry Mason has two choices: represent the cunning widow in her wrangle for the dead man's money -- or take the rap for murder.

Unlike many others in the Perry Mason series, this novel is not centred on a court room drama, but it does introduce the characters who featured in most other novels in the series: his secretary Della Street, a young woman at this time, and obviously in love with her boss; and private eye Paul Drake who hunts down the facts to back up Perry Mason's quirky theories.

It was hard not to see, in my mind's eye, the bulky Raymond Burr who played Perry Mason in the long running television series. And yet, somehow, the central character in this novel does not quite match that tv character.

I can see why, even over 80 years on, why this novel was a winner with readers. The characters are well drawn, the action fast-paced and the plot is full of unexpected twists and turns. Perry Mason points out to his client. who constantly lies to him, that he is hardly a novice. He already has files from hundreds of previous cases in his filing cabinets, and he expects to have many more. He specialises in getting people out of holes. Most of the cases he has been involved in are murder cases, and mostly he gets people off. So here is a lawyer who takes on clients regardless of how much they can pay for his services. See more at Wikipedia.

THE CASE OF THE VELVET CLAWS was made into a film in 1936.

Erle Stanley Gardner (1889-1970) is a prolific American author best known for his works centered on the lawyer-detective Perry Mason. At the time of his death in March of 1970, in Ventura, California, Gardner was "the most widely read of all American writers" and "the most widely translated author in the world," according to social historian Russell Nye. The first Perry Mason novel, The Case of The Velvet Claws, published in 1933, had sold twenty-eight million copies in its first fifteen years. In the mid-1950s, the Perry Mason novels were selling at the rate of twenty thousand copies a day. There have been six motion pictures based on his work and the hugely popular Perry Mason television series starring Raymond Burr, which aired for nine years and 271 episodes.