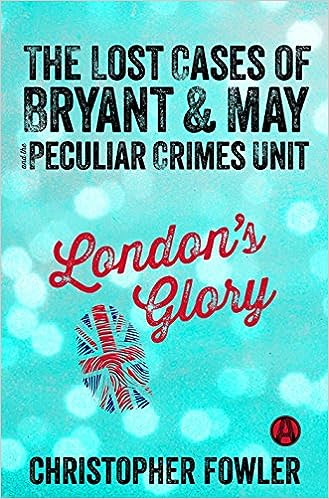 Subtitle: THE LOST CASES OF BRYANT & MAY & THE PECULIAR CRIMES UNIT
Synopsis (NetGalley)

Arthur Bryant and John May of the Peculiar Crimes Unit are London's craftiest and bravest detectives—and there's no better pair to solve the city's most confounding crimes. In this riveting eBook collection of mystery short stories, available together for the first time, Christopher Fowler takes Bryant and May on a series of twisting adventures and brings readers behind the scenes of his beloved novels.

In “Bryant & May in the Field,” a woman is found with her throat slashed in a snowy park, yet the killer managed to escape without leaving any footprints. In “Bryant & May and the Nameless Woman,” a businessman drowns in the pool of a posh club, and the only suspect is a young woman who remains almost too calm during questioning. And in “Bryant & May Ahoy!” the pair go on holiday on a friend's yacht in Turkey, but Bryant realizes there's something fishy about their fellow passengers. From London's grandest mansions to its darkest corners, from the Christmas department of Selfridges to a sinister traveling sideshow, there's no scene too strange for the Peculiar Crimes Unit and the indefatigable detectives at its helm.

Followers of the Bryant & May series will enjoy not only these rather quirky short stories but also Christopher Fowler's introduction in which he talks about why crime fiction remains popular. In the UK crime fiction accounts for more than a third of all fiction published. He comments though that many books were "interchangeable" and lacking in originality. He discusses what he considers were the good points of Golden Age crime fiction. He gives insights into the creation of the Bryant & May series and the projects he set himself in the writing of each novel. At the end of the book we are treated to a synopsis of each of the series' titles, including the backstory that led to its creation.

The central focus of this book is 11 very individual, sometimes quirky, short stories drawn from the whole span of the sleuths' careers. Each story is preceded by a summary of why the story was written or what Fowler was trying to do. Some of the stories are very good but some challenge the bounds of credibility.

In all though, a "must have" book which gives a lot of interesting back ground material for followers of this series.