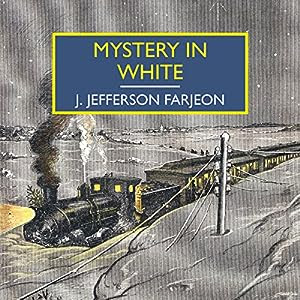 "The horror on the train, great though it may turn out to be, will not compare with the horror that exists here, in this house."

On Christmas Eve, heavy snowfall brings a train to a halt near the village of Hemmersby. Several passengers take shelter in a deserted country house, where the fire has been lit and the table laid for tea - but no one is at home. Trapped together for Christmas, the passengers are seeking to unravel the secrets of the empty house when a murderer strikes in their midst.

Subtitled A Christmas Crime Story, this novel is a variant on a classic mystery plot. Passengers on a train held up by snow drifts on an English countryside railway struggle through the the snow storm to a large  country house which they find deserted yet visitors are obviously expected: the table is laid for tea and fires are burning. The group of seven or eight people are unknown to each other and at least one of them is an unsavoury character.

The plot was fairly tangled and seemed to have the occasional change of direction. The narrator tried, reasonably successfully, to audibly differentiate between each of the characters. One of the older members of the party from the train, Mr Maltby, takes charge and searches for clues about the house owners. He is rather quirky himself, claiming that he is able to commune with the ghost of Charles I, and he makes use of the paranormal in the final denouement of what turns out to be a murder mystery. The owners of the house are discovered stranded in a car in a nearby ditch and are brought back to the house, and a story of what happened in the house twenty years before is revealed.

About the author
Joseph Jefferson Farjeon 1883-1955 was an English crime and mystery novelist, playwright and screenwriter.
At least two of his novels have only been recently published. He was a prolific writer with about 70 novels written from 1920 onwards. His novels were greatly admired by Dorothy L. Sayers, and The British Library reissued Mystery in White: A Christmas Crime Story in 2014, and two further novels in 2015: Thirteen Guests and The Z Murders. Mystery in White is also one of at least three of his novels to have appeared in Italian translations. Others appeared in German, French, and other languages.
He also wrote under the pseudonym of Anthony Smith.

I'm a sucker for train mysteries, so I need to read this one.