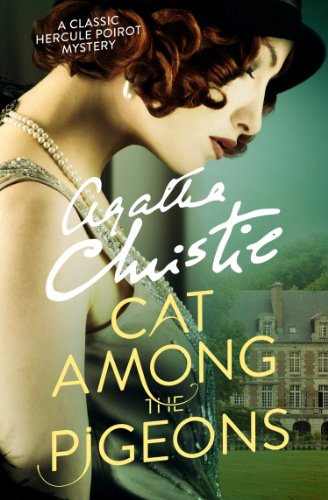 Late one night, two teachers investigate a mysterious flashing light in the sports pavilion, while the rest of the school sleeps. There, among the lacrosse sticks, they stumble upon the body of the unpopular games mistress – shot through the heart from point blank range.

The school is thrown into chaos when the ‘cat’ strikes again. Unfortunately, schoolgirl Julia Upjohn knows too much. In particular, she knows that without Hercule Poirot’s help, she will be the next victim…

Last year I didn't do a very good job of participating in the monthly meme Crime Fiction of the Year Challenge @ Past Offences. I completed reading all the Agatha Christie novels more or less in order of publication in 2014, but last year I found that I was missing my occasional dose of Christie.

So I've decided that this year I will try to read an Agatha Christie novel each month for the appropriate year in the Crime Fiction of the Year Challenge (if one is available).

Having made that decision, I wondered whether a re-reading would bore me. I originally read this novel for the Agatha Christie Reading Challenge in June 2013, and it wasn't new to me then. My review is here. The novel is listed as the 32nd Poirot novel, and my records show it as the 51st Agatha Christie novel.

There were a couple of aspects of particular interest. Firstly the background is a revolution in the Middle East in a fictitious Sheikdom. Prince Ali Yusuf has tried to force change on his kingdom too quickly and has to flee the country. Politics in the Middle East were obviously of great interest to Agatha Christie. Since reading the novel in 2013 I have visited Abu Dhabi a couple of times. Sheik Zayed I modernised his country too, but didn't suffer a revolution.

Second was the character of the principal of Meadowbank School. Miss Bulstrode (and her assistant Miss Chadwick) reminded very strongly of three female school principals that I had met. All were principals of girl's schools. The first school was a metropolitan high school where I was doing my final year of secondary schooling, the second was an elite girls college where I was a junior housemistress, and the third a metropolitan high school at which I was a young teacher. All were women of vision, very strong, very charismatic. Agatha Christie drew Honoria Bulstrode so well, as she did the faithful Chaddy who helped Bulstrode carry out her dream.

Another issue that was of interest was Miss Bulstrode's intention to retire but to groom her successor to eventually take over. In each of the cases I mentioned earlier the issue of succession was a problem, and I well remember, in the first school, the resentment of the students when the principal retired abruptly at the end of the first term. Her successor had a very rough time of it indeed.

So no, I wasn't bored with the re-reading, although I could actually remember most of the plot strands. Poirot doesn't make an appearance until nearly half way through the novel, but it was interesting to see how he related to Miss Bulstrode too.
I think I appreciated Christie's insight a little more than I did three years ago: I have given it a slightly higher rating.

That's a good idea! Although I've read all Agatha Christie's novels I still have a few I haven't written about, so I need to re-read them first.

Thanks Kerrie - look forward to reading your Christie reviews. This isn't one I've ever read.

No Ofsted, no oversight, no national curriculum!