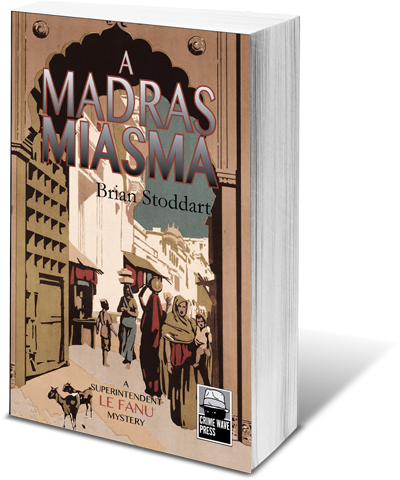 Madras in the 1920s. The British are slowly losing the grip on the subcontinent. The end of the colonial enterprise is in sight and the city on India's east coast is teeming with intrigue.

A grisly murder takes place against the backdrop of political tension and Superintendent Le Fanu, a man of impeccable investigative methods, is called in to find out who killed a respectable young British girl and dumped her in a canal, her veins clogged with morphine.

The first Detective Le Fanu Adventure, A Madras Miasma, tells a classic tale of murder, corruption and intrigue with a sharp eye on British colonial politics and race relations. It is a story that, like its main protagonist, has its heart firmly in the right place.

Here is a new-to-me author whom I have already decided to follow.

This story, set in Madras in the early 1920s, oozes with authenticity. The British Raj is struggling to maintain control of its Indian empire, corruption amongst its administrators is rife, and the voice of the Indian population is getting stronger.

The young woman found dead in a local canal is identified as part of the British "fishing fleet" and flags are raised when she is discovered to have a large level of morphine in her system.  She came to Madras with another young woman who seems surprisingly unaffected by her friend's death. They have been part of the ex-pat social scene for a few weeks, and so there are a number of suspects.

This is a police procedural too, highlighting the tension between the newly created police force, and the colonial administration. Le Fanu's status in the colonial community has been affected by the fact that his wife has left him to return to Britain, and he has an Anglo-Indian housekeeper. He is not popular with the colonial adminstration.

A good plot with some interesting strands. Good reading.

Professor Brian Stoddart is an international consultant who works mainly on higher education reform in Asia and the Middle East, and is currently Distinguished Fellow of the Australia India Institute based at the University of Melbourne.    He trained as a South Asianist then also became an international authority on sport and culture.  His academic career was spent in Australia, Malaysia, Canada and Barbados, and he finished his formal career with a term as Vice-Chancellor and President at La Trobe University in Australia.  In addition to his formal work he is a regular contributor to regular and new media as a columnist and commentator.
He writes regularly for the press and several websites, appears on radio and television, is a frequent keynote speaker at conferences and seminars around the world, and also works as a speaker-lecturer on cruise ships. Brian Stoddart maintains his own blog at www.professorbrianstoddart.com.

Sounds excellent Kerrie, and an author I'd not come across before either. Thanks for linking up to the Aussie Author Challenge :)

This does sound excellent, I'll scare up a copy.

Thanks so much for the post, really appreciate it and hope your readers like the Le Fanu books