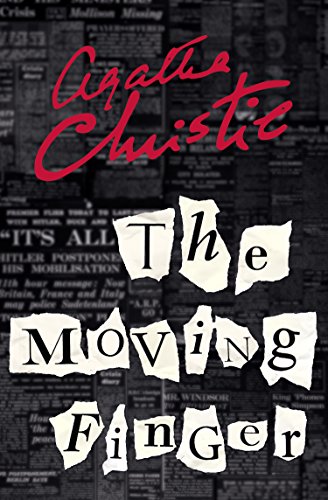 Lymstock is a town with more than its share of shameful secrets – a town where even a sudden outbreak of anonymous hate-mail causes only a minor stir.

But all that changes when one of the recipients, Mrs Symmington, commits suicide. Her final note said ‘I can’t go on’. Only Miss Marple questions the coroner’s verdict of suicide. Was this the work of a poison-pen? Or of a poisoner?

Previously reviewed in 2011  at THE MOVING FINGER (aka THE CASE OF THE MOVING FINGER) - Miss Marple.
I decided to re-read the book as part of my participation in  in the monthly meme Crime Fiction of the Year Challenge @ Past Offences. The year for February is 1943.

I don't want to repeat much of what I said in the earlier review, so I encourage you to look at that one too.

We are never really told what has happened to Jerry Burton to bring him and his sister to Little Furze at Lymstock. He appears to have been an airplane pilot who has crashed - he has been in plaster, has something wrong with his back, he walks with sticks, and wonders if he will ever be able to fly again. The timing of the publication seems to suggest he has be in the war, but there is never a reference to the war effort. He is worried that he will be bored with country life, and certainly his sister Joanna has to make a real effort to fit in. But then they get a poison pen letter suggesting that they are not really brother and sister. Others in the village have already had similarly scurrilous letters and more make their appearance. The local police are baffled and call in an expert from Scotland Yard who points out the similarities between these letters and others in earlier cases that he has solved. The local lawyer's wife gets a letter and commits suicide and then a week later a murder takes place.

While this is labelled as a "Miss Marple" she really plays a role only in the last quarter of the book. I wondered in my earlier reading about why she appeared so late and I'm almost convinced that Agatha Christie had originally meant this to be a stand-alone. However by the middle of the book, there are too many red herrings, too many possible murderers and the police and the amateur sleuth Jerry Burton are in desperate need of an independent point of view. So Jane Marple to the rescue! Miss Marple is invited to stay by the vicar's wife, Mrs Dane Calthrop. (She, by the way, will appear 20 years later in an Ariadne Oliver title). Miss Marple of course solves the puzzle. She says the solution was pretty simple. Everone else was just focussing on the wrong things.

I am amazed that I can re-read these titles and still find something else in them. I must confess also that I don't remember every plot nuance, so I don't get bored with the re-read either.

Check my list of reviews of  all the Agatha Christie novels.

This was my first book of the year and I reviewed it here
https://shaletrjimmy.blogspot.in/2017/01/the-moving-finger-by-agatha-christie_15.html