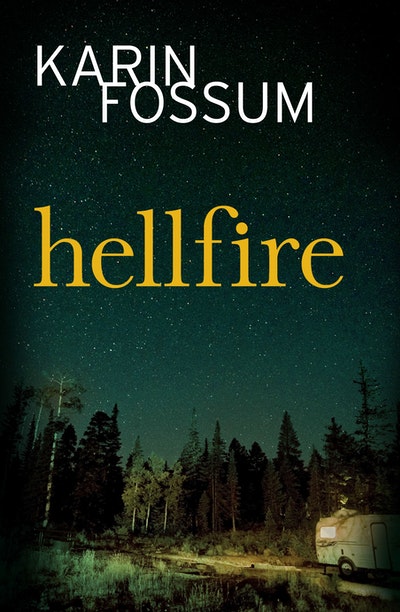 
A mother and child are found brutally murdered in an old caravan on a remote piece of land. A bloody footprint is discovered at the scene, and Chief Inspector Sejer is called to investigate.

Meanwhile, another mother, dying of cancer, confesses to her 21-year-old son that he is adopted. The man who abandoned them, whom the boy has become obsessed by, is not his real father.

Why do we lie to those closest to us? Hellfire delves deep into the dark heart of family, and what drives people to commit the most horrific of crimes.

I'd almost forgotten how very readable this series is.

We see the action of the novel from three points of view: Bonnie works as a home help. She has a small son Simon and is a single mother. Christmas is approaching. Bonnie visits ten homes a week, and there are little vignettes from each of her visits. In the same time frame we meet Mass and her 21 year old son Eddie. Eddie appears to have something similar to Asbergers and is unable to work. He is very anxious to know more about his father whom his mother says died in Denmark some years earlier. But in reality what Mass tells Eddie is a tissue of lies. In the third scenario we jump to Inspector Sejer and the investigation into a double murder six months later.

The interesting thing for me was that this police procedural felt almost pedestrian until the breakthrough came. Sejer fairly quickly discovers the identity of the bodies in the caravan but when he contacts the family they give him edited versions of the facts, leaving out bits they didn't think he needed to know.

The fact that the novel jumps between three narratives and a time frame that spans over six months keeps the reader on their toes. A couple of red herrings are thrown in just to create some false trails.

Easy to see why Karin Fossum is so highly thought of. As you will see from the list below, I generally enjoy her books.