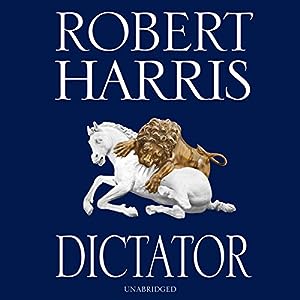 Synopsis (Audible)There was a time when Cicero held Caesar’s life in the palm of his hand. But now Caesar is the dominant figure, and Cicero’s life is in ruins.

Exiled, separated from his wife and children, his possessions confiscated, his life constantly in danger, Cicero is tormented by the knowledge that he has sacrificed power for the sake of his principles.

His comeback requires wit, skill and courage - and, for a brief and glorious period, the legendary orator is once more the supreme senator in Rome.

But politics is never static, and no statesman, however cunning, can safeguard against the ambition and corruption of others.

Riveting and tumultuous, Dictator encompasses some of the most epic events in human history yet is also an intimate portrait of a brilliant, flawed, frequently fearful yet ultimately brave man - a hero for his time and for ours.

It took some time to get used to the different narrator in this series (the earlier books IMPERIUM and LUSTRUM had been narrated by Bill Wallis who had done such a good job).

The story resumes with Julius Caesar in power and the Roman Republic in tatters as the Senate struggles for a way to control his megolomania. And then the assassination of Caesar by senators who think they are saving the Republic leads to chaos because there really is no-one to take charge and in the long run Cicero is really too old. He thinks he has Caesar's heir Octavian under control  but sadly misjudges the situation.

This series really brings history to life as well has making it relevant to the modern context. The audio books are excellent.