Review: WHY DID YOU LIE? Yrsa Sigurdardottir 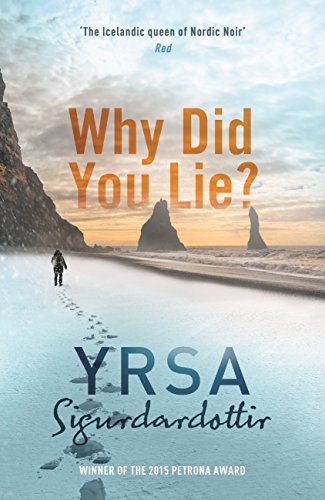 The Sunday Times top crime read of the year.

A journalist on the track of an old case attempts suicide.

An ordinary couple return from a house swap in the states to find their home in disarray and their guests seemingly missing.

Four strangers struggle to find shelter on a windswept spike of rock in the middle of a raging sea.

They have one thing in common: they all lied.

And someone is determined to punish them...

How to describe this plot? Take 3 seemingly unconnected stories.  You know they must be connected somehow but what or who is the connecting point is really elusive.  Each of the scenarios is fascinating but how they are linked is hidden until the very end. And there comes a final surprise, a real whammy out of left field.

Credit for making the connections goes to the wife of the journalist who, as a result of his attempted suicide, is lying in hospital on life support. Nina is a policewoman in disgrace, on light duties, supposedly clearing out files in the police station basement. She needs to know why Throstur tried to commit suicide and comes across some old files that link him with her boss.

And then right at the end, after we think we know everything, just a hint that it is not yet all over.

She is a compelling writer. I've read The Silence of the Sea, wondering all the while why no one fired that secretary, and now have Ashes to Dust on my TBR stack. This one will be next.

She is such a talented writer. I want to read this one very much, Kerrie