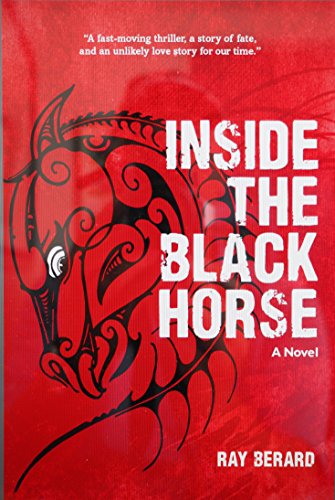 Inside the Black Horse is a fast-moving thriller, a story of fate, and unlikely love story for our time. Pio Morgan is waiting outside a pub on a cold winter night. There is a debt he must pay and no options left. What he does next drags a group of strangers into a web of confusion that over the course of a few days changes all their lives. The young Maori widow just trying to raise her children, the corporate executive hiding his mistake, the gang of criminals that will do what ever it takes to recover what they've lost - and the outsider sent to town to try and figure out who did what. Time is running out for all of them as events take an increasingly dark turn.

Inside the Black Horse explores equally the emotions felt by the victim and perpetrator and the effect of crime on the lives of ordinary people, gang members and drug dealers. This book could be based in any city in New Zealand. So real that you can visualize the characters in the book, feel their desperation, sense their hope for the future, and find compassion for them as you join them on their journey. With a few good twists along the way, it’s a great read.

This book creates an interesting picture of contemporary New Zealand, particularly of a multi- layered drug culture, with a pyramid of users and pushers, with upper layers feeding off the misery of those below. The main characters in this pyramid are Maori born and their elders don't understand what has happened to the old values.

The possibility that the owner of the Black Horse Bar and Casino was somehow involved in the events that took place, gives Peter Butterworth a possible way of covering up the mistake he's made in not having the Black Horse's taking collected in the previous week. He brings in ex-US policeman, private investigator Brian Duncan in the hope that he can find some incriminating evidence.

A really enjoyable and carefully written book with strong and well depicted characters. I liked the way the final results were not entirely predictable.

About the author
Ray Berard is a Canadian born Kiwi writer based in Christchurch, New Zealand.

A McGill University graduate and five-year member of the NZ Authors Society, writing has always been his passion, and in recent years a full-time one.

Inside the Black Horse is his debut novel, based off a diary he kept during his years supervising betting outlets for the New Zealand Racing Board. "It's about New Zealand right now, and what happens when a group of strangers get drawn into each other's lives after a young man's desperate act."

Ray is currently working on his second Novel, The Diary of a Dead Man.

Very glad you liked this one, Kerrie. I thought it was well-written, too.

I was one of the judges of last year's Ngaio Marsh Award, and I couldn't agree more with your comments. It really was a unique mystery.