review: SOMETHING IN THE WATER, Catherine Steadman 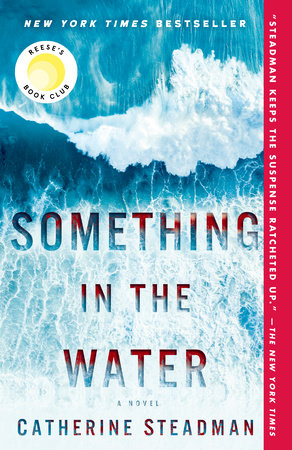 If you could make one simple choice that would change your life forever, would you?

Erin is a documentary filmmaker on the brink of a professional breakthrough, Mark a handsome investment banker with big plans. Passionately in love, they embark on a dream honeymoon to the tropical island of Bora Bora, where they enjoy the sun, the sand, and each other. Then, while scuba diving in the crystal blue sea, they find something in the water. . . .

Could the life of your dreams be the stuff of nightmares?

Suddenly the newlyweds must make a dangerous choice: to speak out or to protect their secret. After all, if no one else knows, who would be hurt? Their decision will trigger a devastating chain of events. . . .

Have you ever wondered how long it takes to dig a grave?

Wonder no longer. Catherine Steadman’s enthralling voice shines throughout this spellbinding debut novel. With piercing insight and fascinating twists, Something in the Water challenges the reader to confront the hopes we desperately cling to, the ideals we’re tempted to abandon, and the perfect lies we tell ourselves.

In opening pages of the novel we meet Erin digging a grave. By the end of Chapter 1 we know who the grave is for, and then in the rest of the novel we find out what led up to this.

Erin is a documentary film maker tracking the lives of 3 very different people as they finish their jail sentences and leave jail. The first one, Holli, she finds "creepy", but she gets close to the other two Alexa and Eddie for very different reasons.

Just before Erin and Mark get married Mark loses his job as an investment banker. They make changes to their wedding plans, cutting costs where they can, and cut their honeymoon on Bora Bora to 2 weeks. But both have become used to an expensive life style and this determines how they will react to what they find in the water when they are scuba diving.

Neither is entirely truthful to the other and each keeps things back, so there are some surprises towards the end of the novel. I felt both characters changed as the novel developed, and I thought there was an element of "what else can I throw at them?" in the final plot.

About the author
Catherine Steadman (b. 1987) is an actress and writer based in North London. She is known for her roles in Downton Abbey and Tutankhamun, starring alongside Sam Neill, as well as shows including Breathless, The Inbetweeners, The Tudors, and Fresh Meat. She also has appeared on stage in the West End including Oppenheimer for the RSC, for which she was nominated for a 2016 Laurence Olivier Award.

I really enjoyed this one. see why: https://wordsandpeace.com/2018/06/07/book-review-something-in-the-water/