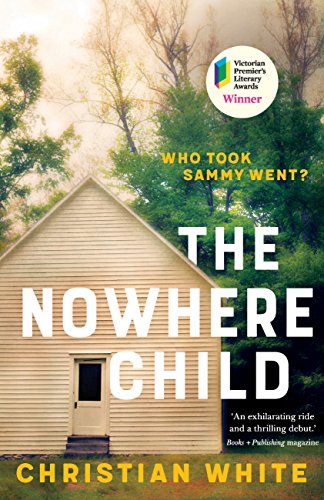 ‘Her name is Sammy Went. This photo was taken on her second birthday. Three days later she was gone.’

On a break between teaching photography classes in Melbourne, Kim Leamy is approached by a stranger investigating the disappearance of a little girl from her Kentucky home twenty-eight years earlier. He believes Kim is that girl.

At first she brushes it off, but when Kim scratches the surface of her family history in Australia, questions arise that aren’t easily answered. To find the truth, she must travel to Sammy’s home of Manson, Kentucky, and into a dark past. As the mystery of Sammy’s disappearance unravels and the town’s secrets are revealed, this superb novel builds towards an electrifying climax.

Inspired by Gillian Flynn’s frenetic suspense and Stephen King’s masterful world-building, The Nowhere Child is a combustible tale of trauma, cult, conspiracy and memory. It is the remarkable debut of Christian White, an exhilarating new Australian talent.

I've had this book sitting on my Kindle for some months now, courtesy NetGalley, and now it has been chosen by our book group for our monthly read.

Kim Leamy is approached by someone who has been searching for his lost sister for years. He has scanned thousands of online images looking for similarities to an artist's impression of what his sister would look like nearly three decades after her disappearance. But he is American and Kim has a hard job thinking that the woman who brought her up would have been a kidnapper.

However he tells her that a DNA test he has had taken by a Melbourne lab says there is a 98.5% probability that she is is sister. When she approaches her father it is obvious to Kim that there is some truth in what the American is telling her, that her father knows, and she decides to go to America to find out the truth for herself.

About the author
Christian White is an internationally bestselling and award-winning Australian author and screenwriter. His debut novel, The Nowhere Child, won the 2017 Victorian Premier's Literary Award. He is currently in development with Matchbox Pictures on a new television series which he co-created, inspired by his script One Year Later, winner of the 2013 Australian Writers Guild ‘Think Inside The Box’ competition. His films have been shown at film festivals around the world. He lives in Melbourne with his wife and their greyhound.