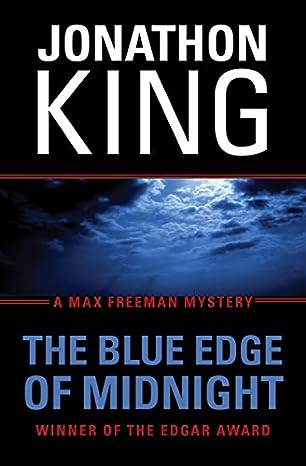 Max Freeman's old life ended on a night that will haunt him for ever. The night he killed a twelve year old child in self defence in a Philadelphia shootout. The night he stopped being a cop. Now he lives an existence of solitary confinement on the edge of the Florida Everglades, where he answers to no one but the demons that eat away at his conscience.

And then he finds the corpse of a child beside an ancient river, and Freeman's past explodes into the present. He is thrust into the centre of the search for a serial killer, distrusted as an outsider by the longtime residents of the Glades and considered a suspect by the police. Freeman must walk a tightrope of distrust on both sides of the law. When another child goes missing, all eyes turn to Freeman, and the ex cop, driven by his old habits and the memories of that long ago Philadelphia midnight, knows that he has no choice but to hunt down the murderer himself.

THE BLUE EDGE OF MIDNIGHT won the Edgar Award for best first novel in 2003.

One of the interesting features of the novel, given that it is published at the beginning of the 21st century, is the use of a GPS tracking device, left as a clue to detectives near the site of each child's body. For me that was a distraction because I am not sure that it worked as the author thought it might. Nor was I sure that the murderer would be able to afford to do that. Surely GPS devices in 2003 were very expensive?

The murderer appears to be trying to pin the series of murders that he is committing of children on to Max Freeman. And therein lies one of the puzzles. Apart from accidentally killing a child himself, what has Max Freeman done to become a target for a serial killer? And then secondly, why is he killing children? The answers are there, and make sense in the end.

A very dark novel painting an interesting picture of life in the Everglades, newly opened up to tourists by the road built from Tampa to Miami.

About the author
Edgar-award winning author Jonathon King is the creator of the Max Freeman crime series set in the Everglades and on the hard streets of urban South Florida. In his previous career as a journalist, he was a police and court reporter for 24 years with the Sun-Sentinel in Fort Lauderdale and the Philadelphia Daily News.