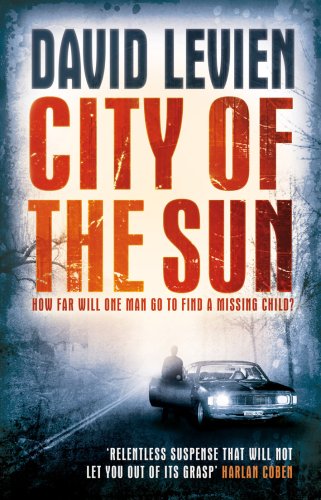 Private detective Frank Behr has been perfectly content living a solitary life, working on a few simple cases, and attempting to move on from his painful past. But when Paul and Carol Gabriel ask him to help them find their missing son, he can hardly refuse. Going against everything he fears—Behr’s been around too long to hope for a happy ending—he enters into an uneasy partnership with Paul on a quest for the truth that will become both dangerous and haunting. Richly textured and crackling with suspense on every page, City of the Sun masterfully takes readers on an investigation like no other.

Twelve-year-old Jamie Gabriel gets on his bike before dawn to deliver newspapers in his suburban neighbourhood. Somewhere en route, he vanishes without a trace. Fourteen months later, still with no sign of Jamie and having lost all faith in the police, his parents Paul and Carol are on the verge of abandoning hope. Then they meet private investigator Frank Behr, a tough, reclusive ex-cop. Abandoned by his former colleagues, separated from his wife and haunted by his own terrible past, Behr doesn't make it a practice to take on hopeless cases, but the desperate couple's plea for help awakens a personal pain he can't ignore . . .

Jamie Gabriel has been missing for 14 months when his parents Paul and Carol meet private investigator Frank Behr. As far as they can tell the police in Indianapolis gave up nearly a year ago on what seems to be a dead-end case. Behr takes on their case against his better judgement, and then he allows Paul to become his partner in the investigation, again against his better judgement.

This is the first novel in the Frank Behr series and we spend a lot of the book in getting to know him.
An ex-cop, Frank tries to focus on what the police haven't looked at. Where in his paper round did Jamie stop delivering the papers? What happened to his bike? Have other boys his age also gone missing? What do the cases have in common? These separate threads begin to yield results.

An intriguing novel that turns into a thriller at the end.
A good read.

About the author
David Levien, author of Thirteen Million Dollar Pop, Where the Dead Lay, City of the Sun, and Signature Kill, has been nominated for the Edgar, Hammett, and Shamus awards. He is also a screenwriter and director, including co-director of Solitary Man (2009) starring Michael Douglas. He lives in Connecticut.