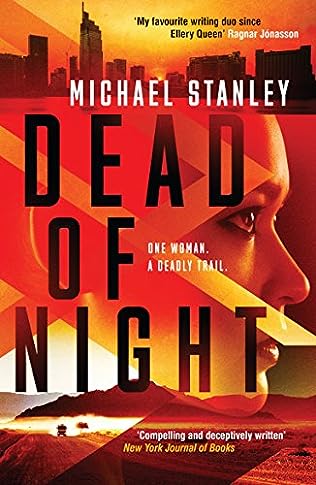 When freelance journalist, Crystal Nguyen, heads to South Africa, she thinks she'll be researching an article on rhino-horn smuggling for National Geographic, while searching for her missing colleague. But within a week, she's been hunting poachers, hunted by their bosses, and then arrested in connection with a murder. And everyone is after a briefcase full of money that may hold the key to everything...

Fleeing South Africa, she goes undercover in Vietnam, trying to discover the truth before she's exposed by the local mafia. Discovering the plot behind the money is only half the battle. Now she must convince the South African authorities to take action before it's too late. She has a shocking story to tell, if she survives long enough to tell it...

Fast-paced, relevant and chilling, Dead of Night is a stunning new thriller that exposes one of the most vicious conflicts on the African continent...

Writing duo Michael Stanley have ventured into relatively uncharted waters with a stand alone novel grounded in their extensive knowledge of South Africa and its problems.

Rhino horn smuggling is rife in South Africa, with poachers killing an estimated 100 rhinos per month, bringing black rhino to the point of extinction. See more.

So the setting of this novel is very topical and the issues are well described.

Freelance journalist Crystal Nguyen is a very impetuous young lady who gets away with amazingly daring deeds. I'm not sure  she will feature again in the novels of Michael Stanley (I personally favour more Kubu novels), but this one was very readable, and I feel I have more understanding now of what is going on.

I've also reviewed
5.0, A CARRION DEATH
4.8, THE SECOND DEATH OF GOODLUCK TINUBU
5.0, DEATH OF THE MANTIS
5.0, DEADLY HARVEST
4.5, DETECTIVE KUBU INVESTIGATES: a collection of short stories
4.7, A DEATH IN THE FAMILY