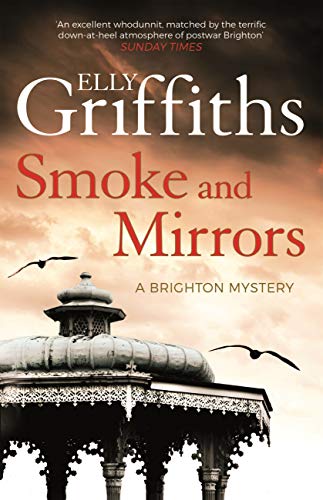 December 1951. It’s snowing and two children, Mark and Annie, have gone missing in Brighton. As DI Edgar Stephens leads an increasing desperate search, Max Mephisto is preparing to star in Aladdin on the end of the pier. Then the children’s bodies are found on lonely downland, surrounded by a trail of sweets. For old music hall star, Stan Parks (aka The Great Diablo), the case sparks memories of another murder before the war, when the killer was obsessed with the dark origins of pantomime. Annie used to write plays for the other children, disturbing versions of old tales. Could there be a link between the murders and these stories?

As Christmas approaches, Edgar embarks on the most difficult case of his career. Then another child vanishes. Can Edgar put the pieces of the puzzle together before it’s too late?

I've found that I haven't read THE ZIG ZAG GIRL, which is the first in this series. This is something that I must remedy as I have thoroughly enjoyed this title. I did read THE VANISHING BOX, but I think my lower rating must have reflected my unfamiliarity with the earlier titles.

This mystery is intriguing right from the start. Two children disappear playing together after school, one of them a very precocious writer who writes her own versions of fairy tales and then organises children to act them out. Her script is based on something she has worked out about her family.

I really like this series, it’s worth reading from the first.