Review: THE JEWEL THAT WAS OURS, Colin Dexter - audio book 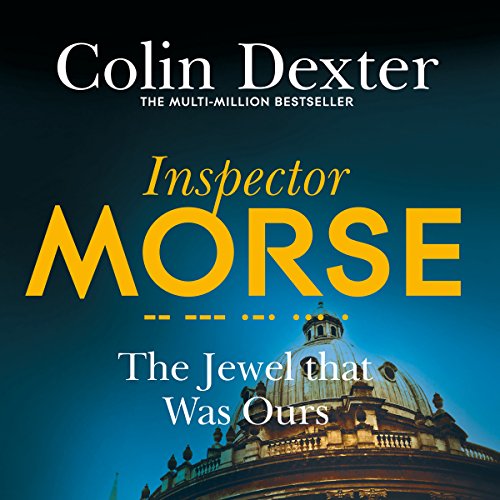 He looked overweight around the midriff, though nowhere else, and she wondered whether perhaps he drank too much. He looked weary, as if he had been up most of the night conducting his investigations....

For Oxford, the arrival of 27 American tourists is nothing out of the ordinary...until one of their number is found dead in Room 310 at the Randolph Hotel.

It looks like a sudden - and tragic - accident. Only Chief Inspector Morse appears not to overlook the simultaneous theft of a jewel-encrusted antique from the victim's handbag....

Then, two days later, a naked and battered corpse is dragged from the River Cherwell. A coincidence? Maybe. But this time Morse is determined to prove the link....

Morse doesn't always get it right. Sometimes he gets to the point of actually charging a suspect before he realises that he's got it wrong. In fact Lewis thinks that Morse creates scenarios before he looks at the facts. But somehow he gets some elements right and then he plucks something else out of left field, and somehow it all fits.

We listen carefully, just as Lewis does, and eventually Morse persuades us.

We have really been enjoying this set of audio books narrated superbly by Samuel West.