Review: SERVICE OF ALL THE DEAD, Colin Dexter - audio book 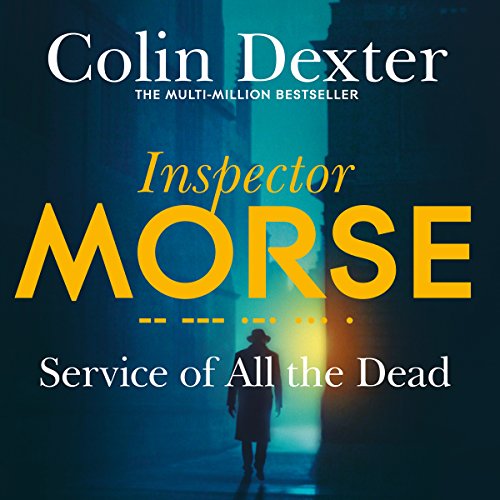 Chief Inspector Morse, a middle-aged bachelor with a fondness for crossword puzzles, Mozart, and attractive women, investigates a series of suspicious and sinister events at Oxfords Church of St. Frideswide.

The sweet countenance of Reason greeted Morse serenely when he woke and told him that it would be no bad idea to have a quiet look at the problem itself before galloping off to a solution.

Chief Inspector Morse was alone among the congregation in suspecting continued unrest in the quiet parish of St Frideswide's.

Most people could still remember the churchwarden's murder. A few could still recall the murderer's suicide. Now even the police had closed the case.

Until a chance meeting among the tombstones reveals startling new evidence of a conspiracy to deceive...

Six dead bodies makes this story feel very complicated. How many of them are murders and how many are connected to each other? Morse himself is responsible for the death of the final person.

This is almost a cold case, or at least an unsolved mystery. The first murder took place in the vestry during a service when the church warden was stabbed by an intruder as he was counting the collection. The second followed soon after when the vicar threw himself off the bell tower. The most recent was nursing sister found dead in a hotel room.  It took some time to work out her identity.

It takes Morse's peculiar brain to work out how all the deaths are connected to each other.

The novel is divided into four books. Each book takes its name from a book of the Old Testament and follows a different style of writing. Notably, the third is in the form of a statement taken from a witness and the fourth (mostly) takes the form of court proceedings.

It is a very convoluted set of events, and I don't feel that the structure of the novel helped create a particularly successful audio production, although the narration is excellent once again.

The final events show us just how human Morse is.