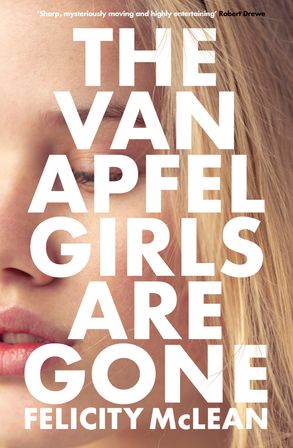 Part mystery, part coming of age story, The Van Apfel Girls are Gone is set in a distant suburb on the encroaching bushland, over the long hot summer of 1992. It's the summer of the school's Showstopper concert. The summer Tikka never forgot. The summer the Van Apfel sisters disappeared. Blackly comic, sharply observed and wonderfully endearing.

'We lost all three girls that summer. Let them slip away like the words of some half-remembered song and when one came back, she wasn't the one we were trying to recall to begin with.'

Tikka Molloy was eleven and one-sixth years old during the long hot summer of 1992 - the summer the Van Apfel sisters disappeared. Hannah, beautiful Cordelia and Ruth vanished during the night of the school's Showstopper concert at the amphitheatre by the river, surrounded by encroaching bushland.

Now, years later, Tikka has returned home to try and make sense of the summer that shaped her, and the girls that she never forgot.

Blackly comic, sharply observed and wonderfully endearing, this is Picnic at Hanging Rock for a new generation, a haunting coming-of-age story with a shimmering, unexplained mystery at its heart.

Twenty years on, Tikka Molloy has always been haunted by the disappearance of the Van Apfel sisters. Were there things that she and her older sister should have told the investigating police at the time?

There is a strong Australian setting to this novel - not just the commentary in the background
of the Lindy Chamberlain case, but the heat, the bushland, and the flavour of the description. I thought there was also a touch of Scout (To Kill a Mockingbird), of things observed but not necessarily understood. And the story leaves us with more questions, the opportunity to write our own ending, to come to our own conclusions.

About the author
Felicity McLean is a writer and a journalist.  Her writing has appeared in The Good Weekend, the Daily Telegraph, the Herald Sun, the Big Issue and more. She has written fiction and non-fiction books and has been published by HarperCollins Publishers, Allen & Unwin and Black Inc. Her latest book, Body Lengths, was co-written with Olympian Leisel Jones. It won the 2016 Australian Book Industry Awards 'Reader's Choice' for Small Publisher Adult Book of the Year, and it was Apple iBook's 'Best Biography of 2015′. As a ghostwriter she has collaborated with celebrities, sports stars, business leaders and others.This is her first novel.

Felicity will be sharing the stage with Michael Robotham at Adelaide Writers' Week 2020.